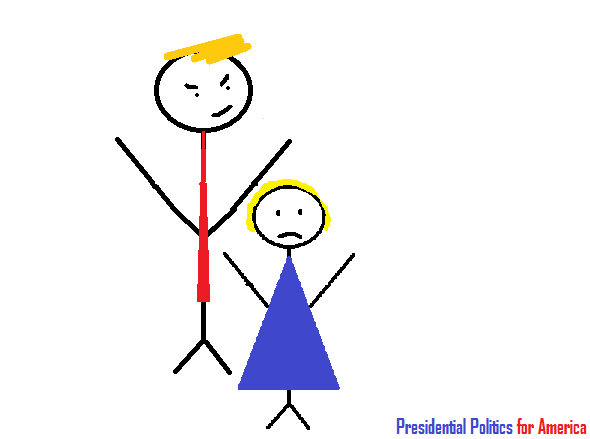 Below are ten PPFA thoughts from last night’s horrific debate (transcript here), which started with a moderator asking a candidate for the presidency of the United States if he was aware he had bragged about committing sexual assault. (If you understandably need a laugh instead of a debate review this morning, I recommend these 38 tweets. Ken Bone 2016!)

1. In the first half hour of this town hall debate, the town hall was nowhere to be found. Filling much of that time was Donald Trump throwing everything he could find at his opponent. (If you looked closely at the base of Hillary Clinton’s lectern, you could see remnants of a kitchen sink.) Trump charged that Hillary Clinton laughed at a rape victim.  He raised old names like Paula Jones and Sydney Blumenthal. He imitated that there is still a rivalry between her and the Obamas, and between her and Bernie Sanders, despite their vociferous support of her candidacy. He grilled her on the 33,000 emails. He called her the devil. He said if he was president she would be in jail. The veracity of these claims can be, depending on one’s preferred media outlet, debunked or affirmed, but what is undeniable is that very little of this opening half hour was spent talking about the undecided voters in the room.

2. Still, it’s important to note that this was the Donald Trump his supporters were hoping would show up ever since they started voting for him in the primaries. The first debate was a let down for them because he didn’t get personal.  Last night, he corrected that disappointment. He gave voice to internet chat rooms across the country; their avatar of anger showed up. Moreover, someone clearly taught Trump the art of the pivot, though instead of a paintbrush he’s more of a cudgel man. Compared to the first debate, he was much more prepared to go on the offensive this time around. He criticized Obama-Clinton with nearly every diatribe, succeeding more as a prosecutor of them than as a defendant of his own past.

3. That’s not to say Trump had what we can call a “good” debate. Such a description is only apt if we at the same time recognize just how lowered his bar has become. After all, in 90 minutes, he admitted he didn’t pay federal income taxes; threatened to jail his political opponent; described said political opponent as having “tremendous hate in her heart”; was clearly clueless about Aleppo (an astonishing ignorance considering the ridicule Libertarian candidate Gary Johnson received over it); openly disagreed with his own vice president on the minor issue of foreign policy; and tried to normalize boys’ club jocularity on sexual assault and rape culture.

4. Oh, can I talk about that last one, please? Thanks! Trump’s plan to survive his vulgar caught-on-tape moment is two-fold:

If some candidates think, “we shouldn’t waste time talking about ‘low priority issue x’ while ‘high priority issue y’ is what Americans really care about,” then they A) Will interpret what Americans really care about, a subjective process that will lead to only one’s own priorities being discussed, and/or B) Have to admit nothing — not the economy, not the debt, not NAFTA, and least of all the temperament of our leaders — is as important as their singular most important issue, and we therefore shouldn’t “waste time” talking about them.

Thankfully, Americans have a funny way of deciding for themselves what’s important in their country and in their leaders.

5. I’m sure there will be charges of media bias against moderators Anderson Cooper and Martha Raddatz, who pressed and interrupted Trump considerably more often than they did Clinton. While that’s objectively true, and Raddatz may have crossed the line when she arguably injected too much of her own analysis into the debate, Trump also wandered off topic more frequently, a problem that is precisely the role of the moderator to correct. In fact, for all his complaining about not getting equal time, Trump actually spoke for 65 five seconds longer than Clinton did.

6. Moreover, for the second straight debate, the Trump Campaign lives in a glass house when it comes to throwing accusations of interruptions. Much like the first debate, he interrupted Clinton 18 times or more, with Clinton only doing it one to three times back. If the conservative right praised Mike Pence for his superior behavior whilst also criticizing Tim Kaine for his incessant interruptions, than nothing short of hypocrisy can explain why that doesn’t go both ways. (For the record, Presidential Politics for America chides rudeness universally.)

7. Instead, the closest thing to anti-Trump media bias was that, for the second straight debate, there were no questions on illegal immigration, Trump’s top issue. Chris Wallace, the third debate moderator, must place that topic into the first half hour. After all, it’s the third most important issue on “Presidential Politics for America’s Priorities Spectrum for America.”

8. Much has been made about the “visuals” of the candidates. I don’t think we should exaggerate its importance, but we can also acknowledge it as some of the most bizarre optics in debate history. Trump’s pacing — almost stalking — during Clinton’s responses was mesmerizing. He was like a bull before the charge; look closely and you could see smoke ejected from his nostrils. (Perhaps all the sniffing tries to keep it in?) Most notably, when Clinton moved to Trump’s side of the room to speak with a voter, Trump hovered a few feet behind, towering over her by a foot and a comb over. If you remember that Vice President Al Gore lost points on getting too close to Governor George W. Bush in 2000, the visuals can make a difference.

9. As for the substance of the debate, Clinton was considerably off her game. For most of the night, it seemed she didn’t know how to handle Trump’s tirades. My guess is that she was instructed to calmly say “That was false” before annoyingly redirecting us to HillaryClinton.com instead of more strongly standing up for herself and husband. Unfortunately, such passivity allowed Trump to control the debate. His Aleppo ignorance, for example, was the perfect moment for Clinton to contrast herself as the informed candidate. That means holding him to task for his obtuseness, not just reciting her sixth straight practiced response. After a strong start to her debate — before the car went off the rails — she never looked comfortable again, which was a marked difference from the first debate. Trump should be given credit for that; his asymmetrical warfare kept her off balance.

10. So was that a Trump win? And what now? PPFA’s pathetic prescience faces a considerable challenge. I do think his loose cannon prosecution of the Democratic nominee was catnip to any Republican voters who were on the verge of abandoning him. Plus, unlike the first debate, CNN’s poll suggest Trump did better this time around (even with the survey’s Democratic oversampling), while Frank Luntz’s focus group — which awarded Clinton the first debate — suggest that Trump won the debate and undecided voters.

At the same time, Trump was already going nova, and there’s a decent chance that not even Spock’s red matter could have reversed it. (Too obscure a reference? Okay, full refund.) While Trump may have galvanized any supporters on the edge of desertion, to more than reverse the momentum of the previous 48 hours was probably impossible. Remember, his deficit was already growing before the tape. The tape then surely made it worse, which was essentially double the momentum working against him.  The goal of the night, I think, was to punt on a full comeback to later in the month and instead put his Republican electorate back together again. If he broke even on the weekend, then the debate was a huge success, and I guess that makes him the winner. I guess.

Moving forward, assuming Trump feels good about last night’s performance, I’m genuinely worried that he is now in scorched-earth mode. He might lose the election, but he’ll torch the countryside in a last ditch effort to win. Clinton lacks the hose with which to combat such pyromania, so she’ll continually remind us of the gross tape and other crude Trump remarks. PPFA can’t promise it has the stomach for much more of it. If you thought the debate was ugly, just wait for these last four weeks.