A teacher and a pundit, perhaps no one is more qualified to give debate grades than yours truly. So let’s get into it. (Debate transcript here.)

Picking up the ball dropped by Marianne Williamson, Tom Steyer is now the only candidate talking openly about reparations to African Americans. Asking for a “Commission on Race to re-tell the story of America,” he’s clearly reaching out for the minority voters to come. No wonder his eyes are so wide open all the time. No candidate is more woke.

It was a part of a larger pitch to the third and fourth voting states, Nevada and South Carolina. Typically, in debates held in states about to vote, we see candidates make references to that state. But not Tom Steyer. He twice mentioned Nevada by name (no other candidate did it once), and he had a lot to say about South Carolina as well. (“America understands that when a kid succeeds in Columbia, South Carolina, that is a triumph for every American. And the same is true of a kid in Las Vegas, Nevada.”) These are states where he’s currently competitive in polling, and he’s desperate to hold their support after New Hampshire gives him an eighth place showing tomorrow night.

Otherwise, it didn’t seem like he was even trying to win. He kept saying how he liked all the candidates, agreed with what they were saying (even if they contradicted each other), and pointed out what the party must do in order to win without ever really explaining how he would pull it off.

He came across less a presidential candidate as much as a guy firing up his players. Debate grade: C, for Coach.

Yang had laughably less speaking time than any other candidate: 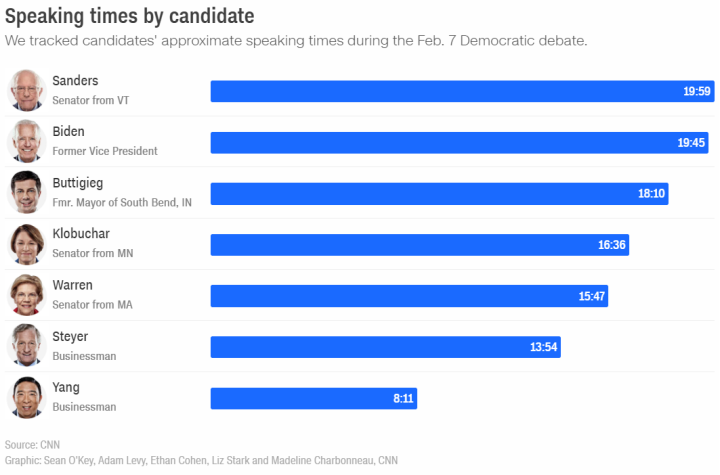 This shortage was particularly glaring when the segment on race came up and the otherwise white dais kept insisting minorities should be empowered while Yang stood stoicly behind an end podium like the help.

He often has less speaking time than most if not all his opponents at these things. Three potential factors might explain why:

Unfortunately, nothing about his debate performance will help him shake up the race and finish higher than sixth tomorrow. Debate grade: B-, as in his speaking time Be Minus than everyone else’s.

That came across as his most urgent debate — and appropriately so. Usually I wouldn’t link raising one’s voice with persuasion and effectiveness, but Biden had come across as so passive and meek in these debates that finally bringing some strength and passion was better than again not doing so. Say what you want about President Trump’s speaking ability, from his lying to his hilariously childish speech patterns, but he sounds confident 100% of the time, and he’s therefore persuasive. Many of us began worrying about how a seemingly fading Biden would hold up over a long campaign. At the very least, he showed his highest level of energy so far, a sign of a desperate campaign that finally realized just sitting on his lead wasn’t good enough.

As for specific moments, he actually had a surprisingly developed, cogent, and evidenced summation of how his gun control record was more progressive than Bernie Sanders’s. It’s probably the only issue where he leans further left than the leftiest Leftist in the party, so I’m surprised it took him until now to force the issue.

Debate grade: B, as in, “Well, there will always B those Obama years.”

Warren was good, but she wasn’t great. Indeed, she hasn’t been great in a while. Go back and watch segments of those first few debates. She was incredible — confident, precise, and with a fine-tuned sense of when to be earnest and when to be dismissive. But as her polling fell, she never regained that mojo.

She’s still solid up there, of course. She knows her plans and has her anti-corruption message down pat. Her last few debates, however, have come across more as punctuated stump speeches, which isn’t a smart debate tactic when she’s trying to win back Sanders progressives and Buttigieg college-educated whites (to pull them back to Earth) while also trying to fight off a desperate Biden and aspiring Klobuchar (who each have designs on her current third-place New Hampshire polling average). She needed to go pick some fights, and she generally didn’t do that. (There was one exception to this approach, but I’ll save it for when I discuss the next candidate.)

Debate grade: B+, which is her grade for her primary campaign overall. It was a bit better than good, but not great, and not good enough for a win. If either Biden or Klobuchar nudge ahead of her for third place tomorrow in a state where she has home-field advantage, we might see our highest-profile drop-out yet.

Buttigieg, as expected, took hits from every candidate. Sanders deserves to be considered the favorite to win New Hampshire and the overall primary, but it’s Buttigieg who’s on the move and surely more vulnerable to losing supporters than Sanders with his devout following. Trying to pick off his support and blunt his momentum therefore made sense.

Buttigieg, however, kept his trademark calm, which I continue to think makes him a great potential foil for a general election against Donald F. Trump. He even had a good response to the Left Wing #TwitterTrend O’ The Day, #PetesBillionaires, which pointed out how he’s billionaires’ most popular candidate. Buttigieg explained he’s been open to billionaire donations because A) he needed to avail himself of everyone’s support in order to compete with bigger names, and B) he wants to beat Donald Trump, who’s become a fundraising monster.

That being said, there was one portion of the debate where he looked uncharacteristically chafed. Moderator Lindsey Davis effectively held Buttigieg to account for the increase of black arrests for marijuana possession in South Bend on his watch. That’s when Warren finally made her only offensive of the night, calling it an insubstantial answer that doesn’t consider how “race has totally permeated our criminal justice system.” Really rubbing salt in Mayor Pete’s wounds there.

Davis’s interrogation could further damage Buttigieg in the eyes of a minority constituency he’s desperate to win over after leaving New Hampshire. Coincidentally, such a pointed question from a moderator reminded me of what Warren herself faced from Judy Woodruff, in the December debate, challenged Warren on her proposed “biggest tax increase since World War II.” Sometimes, moderators make viewers doubt candidates as much as their opponents do. As they should.

Across these eight debates, no candidate has been as fiery, direct, or consistent. The downside? It’s really hard to find something new to say about him in debate reviews!

“The answer to your question of why we have the highest rate of childhood poverty of almost any major country on earth, disproportionately high for the African American community, by the way, is the same reason that we give massive trillion dollar tax breaks to the rich and large corporations. Same reason that we give tens of billions of dollars in subsidies and tax breaks to the fossil fuel industry, while half of our people are living paycheck to paycheck. The same reason that we have three people in America owning more wealth than the bottom half of America.

“The same reason that we are the only major country on earth not to guarantee healthcare to all people as a human right. Same reason as to why we are paying in some cases 10 times more than other countries for prescription drugs, and that reason is that our priorities are determined by the 1% and by wealthy campaign contributors. Our priorities are determined by those who want to see the rich get richer and are turning their backs on the working families of this country.”

It combined a nice deployment of rhetorically repetitive wording, a specific mention of African Americans, who he’s hoping to peel away from Biden in South Carolina and Super Tuesday, an indirect assault of Buttigieg, and a summation of what animates his entire campaign.

He’s gotten really good at this, and he now has his campaign peaking at the perfect time. He’s locked in and deserves to be considered the favorite for the nomination, though I still worry about what will happen when Republicans stop rousing rabbles in his favor and switch to a methodical disembodiment of his record and platform.

Debate grade: A-, as in, if he’s elected, you can expect a minus next to your investments.

It’s hard to remove my subjectivity at this point, but I thought she was earnest, funny, improvisational, spoke directly to New Hampshirites, and the room seemed to be won over. It was exactly what you want out of a debate performance.

The most telling moment was when George Stephanopoulos asked if anyone on on stage was “concerned about having a democratic socialist at the top of the Democratic ticket.” Most candidates looked nervous, fearing an affirmative response would lead to arrows raining down on them from Sanders/AOC online archers, but Klobuchar raised her hand (followed by Coach Steyer) and was more than happy to explain why. That’s what a leader looks like.

Coming out of the debate, Klobuchar raised a quick million on her way to $2 million within 24 hours. We’ll see if it makes a difference in tomorrow’s big primary.

Debate grade: A, for Amy might now finish in third and end the presidential aspiration of Elizabeth and Joe. Stay tuned.