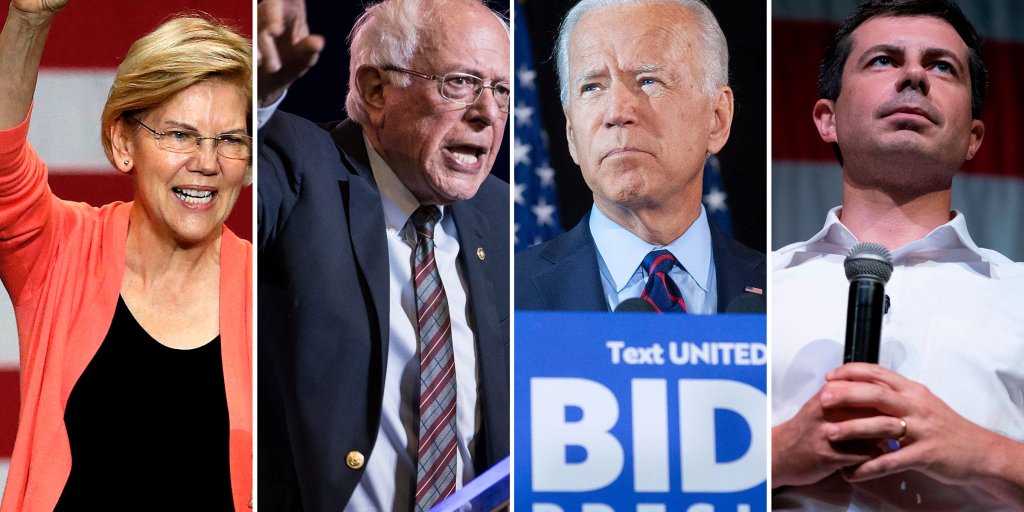 Before we get to ranking the four most likely Democratic nominees, here’s where the January Power Rankings — the New Year’s Resolution Edition! — stand so far:

(The candidates’ December ranking is in parentheses. Candidates are separated into this cycle’s planetary tiers.)

Now it’s time for the Big Four. They’re a clear Big Four according to the oddsmakers, who have them all ranked somewhere between 2/1 and 7/1, whereas Bloonberg is around 12/1 and Klobuchar and Yang are around 30/1. More exciting for PPFA readers, all four of them have shifted their Power Rankings slots from a month ago!

4. Pete Buttigieg (3): Buttigieg is completely relying on strong results in Iowa and New Hampshire to propel his campaign forward. It’s still in play, as he’s virtually tied with Bernie Sanders atop Iowa and running with Elizabeth Warren in a competitive third in New Hampshire. An Iowa win surely gives him a top three in New Hampshire, with a top two more likely than not. Then he could well be in the delegate lead as the campaign shifts to Nevada, and his second best Q4 fundraising numbers puts him in position to convert this success into a bump there.

All that said, in all the national polls, he’s still a clear fourth:

Likely still hamstrung by almost no acceptance in the African American community, he’s having a hard time growing a national movement. Worse yet, his trend-line in national polls is pointing in the wrong direction. Here’s a look at the last three months of the candidates’ rolling Real Clear Politics national average:

New Year’s Resolution: Give a speech that starts, “I was born a poor black child.” Hm, maybe that’s a bad idea.

3. Elizabeth Warren (1): Though I thought Biden regained the top spot after the December 19 debate, I still had Warren at #2 in my mind for the subsequent weeks. I actually thought lowered expectations could set her up for an even stronger bounce after a win in Iowa, where she has a massive campaign footprint and will be extremely organized for caucus night.

But in the first week of 2020, I haven’t liked what I’ve seen. Her polling continues to slowly fall, nationally and in early states. Her fundraising haul was the only one of the top eight fundraisers to drop from Quarter 3 to Quarter 4:

Did PPFA see this coming? You could say that. I also thought her three best debates were the first three. The previous three haven’t been as strong. She’s fallen behind Sanders, Buttigieg, and Biden in Iowa, and she’s neck-and-neck with Buttigieg for third in New Hampshire. There’s even evidence that early state activists are cooling on her. All trends point down for Elizabeth Warren.

And yet, I would still say she’s a close third in today’s rankings, and I really grappled with who to slot #2 (and I think both her and #2 are each about 4/1 to win the nomination). She might yet have a well-timed surge ahead of her, and perhaps Julian Castro’s endorsement yesterday (a clear bid for the vice-presidency in what would be a well-matched pair) came at the right time, much like AOC gave Bernie Sanders a shot in the arm post-heart attack. There’s also evidence that she is less divisive than the two candidates ranked above her, each of whom have supporters who can’t stand the other but could tolerate Warren. She can still grow as candidates drop out or, in a caucus, voters jump from their “nonviable” candidates to another during the process.

New Year’s Resolution: No one has larger stakes heading into the January 14 Des Moines debate. A bad one and she’s toast. A good one and she again sets herself up as a co-favorite for the nomination.

Still, for the moment, it looks like the youthful, diverse Democratic Party is on the precipice of nominating a white man who will turn 80 in his first term.

2. Bernie Sanders (4): Most coverage has now swung in Bernie Sanders’s favor as a legitimate co-favorite for the nomination — and for good reason.

Sunday’s CBS/YouGov polls had him tied for the Iowa lead and ahead outright in New Hampshire:

Meanwhile, that Q4 fundraising number (see above chart from Yahoo Finance) was incredible. President Trump raised $46 million in the fourth quarter, and Sanders is the only Democrat remotely competitive with that number, yet he does it with a divided Democratic Party.

No candidate has a more devoted following, a fact supported by the CBS/YouGov polls. And we know he knows how to caucus; they were a strength of his against Hillary Clinton four years ago. With these numbers and his primary experience, he should be considered the favorite in Iowa. Then if he wins Iowa, he’s the clear favorite in New Hampshire. And no one has ever won the first two contests and not won the nomination (a stat on which Pete Buttigieg is also counting).

On the other hand, a low ceiling continues to be my concern for his campaign. He’s been a 15-to-20 percent candidate all primary. Like President Trump, Sanders has been stuck between a high floor and low ceiling for some time. He’s been up around 20 before, as he is now, but he’s flagged afterwards. He should climb a bit more thanks to a smaller field, but I’m bearish on how much. The CBS/YouGov polls, which spent most of their time impressed with his numbers, still offered this warning: “Underpinning Biden’s support is that more than half of voters in these states describe him as a ‘safe’ choice — even if few see him as an exciting one — while half see Sanders’ policies as ‘too progressive’ to win over swing voters this November.”

I wouldn’t be surprised if Sanders in February faces the same fate as Warren did in November. Specifically, the rise to contention is easy compared to the scrutiny that comes with co-favorite status. Once Democrats start giving more thought about nominating a person who owns being a Democratic-Socialist who will raise taxes, Sanders’s momentum should be redirected.

“As far as [Trump’s] planetary classification, he’s frankly way past a planet at this point. More analogous to the sun, he’s enormous, yellowish-orange, spews weird stuff in every direction, and it seems like our entire lives revolve around him. To compete, Democrats will need someone with Jovian mass. (Or should I say… Joevian?)” —PPFA, January 14, 2019

Alone in the top tier now is Joe Biden. I regret the late autumn months I thought Warren, even as I made the case against her, had the better chance at the nomination. Otherwise, I’ve seen Biden as the favorite in the Democratic Primary since the midterms, mostly due to the Obama connection, a boon for black voters, and Democrats’ obsession with beating President Trump and Biden polling as the best candidate to do that.

Thanks to the last debate, his nomination has never looked more likely. He wasn’t great in the debate — he just wasn’t awful. With such a low bar for success, it became clearer than ever that he was the Trump 2016 of the 2020 primary; you might not love him as an ambassador for the party, but a sufficient number of people like him enough that they don’t care what you think, and gradually the party has coalesces around him with endorsements. For Trump, the tipping point didn’t happen until he won New Hampshire and South Carolina. (I was still picking Rubio heading into and coming out of Iowa — and, by the way, I still think he would have won were it not for Chris Christie dispelling Rubio of his fiction during the New Hampshire debate.) I suspect many won’t accept Biden’s favorite status until Super Tuesday.

That’s because there’s a decent chance February won’t be kind to this front-runner. Indeed, it’s this troubling February schedule, that starts with two very white and very liberal Democratic electorates, that still keeps him as a worse-than-a-coin toss probability. (If I had to ballpark it, I’d say he has a 1 in 3 chance, maybe 4 in 10, which towers over Sanders and Warren’s 2 in 10, Buttigieg’s 1 in 10, and the rest of the field’s combined 1 in 10. Those smaller components still outweigh Biden by himself.) There’s a decent chance he finishes fourth in Iowa. If that happens and Buttigieg or Klobuchar wins it, Biden could even finish fourth in New Hampshire after the Iowa winner surges. Meanwhile, both Sanders and Warren probably both finish in the top three.

But here’s the thing: Biden is the only candidate who doesn’t need a great February. All other candidates, Bloomberg possibly excepted, do. With Sanders and Warren both finishing top three, and either Buttigieg and Klobuchar sticking around, no candidate will achieve escape velocity by Biden’s South Carolina win. Even if Sanders wins the first two states, almost all of the Buttigieg and Klobuchar support, to say nothing of the remaining party apparatus, would likely run to Biden as the last non-Bernie resort while those two candidates fall by the wayside. Sanders would of course absorb much of Warren’s support in that scenario, but Biden will still win South Carolina and sweep the south on Super Tuesday. Then he’ll steadily win pluralities, be seen as inevitable, and win the nomination by May, much like Trump four years ago.

So how does Biden possibly lose? Game theory is unpredictable, but here’s a few scenarios for you, from least to most likely:

Still, my hunch right now is Biden could finish as low as fourth in Iowa, then third in New Hampshire, then second in Nevada, then first in South Carolina. With an arrow pointing up, he’d have a great Super Tuesday and be on his way to the nomination.

New Year’s Resolution: Just four weeks before Iowa, Joe Biden is again the least unlikely winner of the 2020 Democratic Primary. He should resolve to not do anything stupid.