Happy New Year’s Eve Eve Day, PPFA readers! Though last year I posted my “Most-Read Posts of 2018” gimmick on the 31st, this year I’ve moved it up a day. Why? Because I’m on an epic streak of consecutive Monday posts! I’ve posted every Monday since August 26, the first post after my summer hiatus. That post was about Isaac Newton, which is appropriate, because I’ve had quite the forward momentum ever since. Today marks my 19th straight Monday with a post for you.

Before we get into the Top 10 posts of the year, here are some honorable mentions:

Each of the above would be in the top 10 today, but they’re disqualified for one important reason: they weren’t written this year. For various reasons, readers or googlers frequently find their way to those old posts.

Just missed: #4. John Locke (July 1) — My last post before the aforementioned summer hiatus was this analysis of John Locke, who I consider the fourth most influential figure in Western history. As of now, this piece is just 16 clicks behind the year’s tenth most-read post. First, Thomas Jefferson ripped Locke off to write the Declaration of Independence. Then he crash-landed on a desert island. Now this. Poor Locke.

10. We Need to Talk About Amy Klobuchar (June 10): On June 10, Amy Klobuchar officially joined Gary Johnson, John Kasich, and Wesley Clark (no link available) as PPFA-supported candidates that never seemed to get going with a critical mass of followers. Klobuchar still has some time to break the streak… but she’s running out of it. Anyway, some pro-Klobuchar people found this piece and passed it around on Twitter a bit.

9. Instructive March Polls for 2020: Day One — Trump’s Re-Election Numbers (March 25): This post reminded overconfident Democrats that President Trump’s re-election chances were doing just fine despite an approval rating in the low 40s. This realization seemed to unnerve some readers, who then shared it so they had company in their urinated sheets. It now seems most people have come around to the position that Trump is between a coin flip and a near guarantee to be re-elected. When 2020 kicks off in a couple days, I will re-explore the points I made in this post. Stay tuned.

That is a total coincidence. It does, however, feel like a sign that Jesus’s controversial placement as just the seventh most influential figure in Western history was appropriate. What holy spirit sent that sign, you wonder? I think we know.

It was Louis Pasteur.

6. #3. Isaac Newton (August 26): Clearly PPFA readers were excited that its summer break was over! This is one of only two posts found in today’s top ten list that was written after June. Since there’s an obviously greater degree of difficulty for pieces written later in the year to accumulate clicks, this is a good result for history’s most important scientist.

5. #9. Karl Marx (February 21): Apparently Karl Marx is a divisive figure that attracts interest on the internet. Who knew?

4. What Was Happening in History the Last Time Each Planet Was In Its Current Position? (February 4)

Ohhhh yeah, I had a lot of fun writing this one. Merging two of my passions — history and pondering the long, lonely orbits of solar bodies — I asked and answered the question that headlines the column. Apparently you enjoyed it as much as I did.

3. PPFA’s Presidents’ Day Presidents Ranking (February 18): I severely underestimated the people’s interest in PPFA’s evaluations of the presidents. I shouldn’t have rushed it.

2. #1. Christopher Columbus (October 14) Aside from this piece, the rest of the top five is comprised of posts from the first two months of the year. Here, however, an October post breaks through — and for good reason, I’d like to think. My Top 30 countdown, over 30 months in the making, culminated in Christopher Columbus taking the top spot. Fortunately, many readers acknowledged my hard work and took the time to click on and even share this post, so it quickly climbed the charts.

And yet, though Columbus earned the prime spot of my Top 30, it fell one short of topping my most-read pieces of 2019. That honor goes to…

I bet you didn’t see that coming! (Indeed, this surprise showing is emblematic of his campaign overall.) This year’s most-read post — by just over a thousand clicks over the Columbian runner-up — was PPFA’s introduction of Pete Buttigieg. Though that might shock you, I think there’s a couple obvious reasons for his strong showing.

Unlike this site’s most viral post — an October 15, 2015 post on Ted Cruz, which remains the most-read PPFA piece — the Buttigieg piece has been a slow burn all year. As far as I can tell, it was never well-shared compared to other posts on this list. Instead, it has two other key attributes: 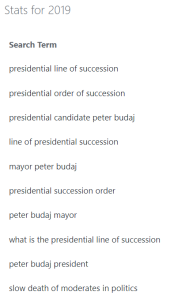 (Weird how people keep wondering who takes over the executive branch after the President and Vice President’s removal. It’s not happening, Dems.)

As far as the piece itself, there were some highlights and lowlights. The main theme was that he was a little-known candidate with a weird last name, but he actually had a lot going for him. (“Despite his obscurity and orthographic shortcomings, he will not be a totally irrelevant candidate.”) I listed many positive qualities and surprisingly full resume for such a young, politically low-ranking candidate. Still, I without question underestimated his chances, starting him at 25/1 odds to win the nomination and suggesting he instead make a gubernatorial bid to raise his profile. (On November, I admitted my two big misses of the 2020 cycle were overrating Beto O’Rourke and underrating Pete Buttigieg.)

I also missed on his strategy — though, to be fair, I think he switched his strategy about halfway through the campaign. He started out targeting millennials and other young voters, but once he realized their energy was with the proven progressives and the progressive candidates had secured their loyalty, he tacked to the center. His recent rise is mostly due to moderate and older voters.

Regardless, Pete Budaj is the subject of PPFA’s most-read post of 2019. If you contributed toward the click count of any of the above or another post that didn’t make the list, thanks so much for reading.