Another month, another debate in the 2020 Democratic Primary. Starting with its late June debate, the DNC has generally maintained a monthly debate schedule. That pattern will continue for at least one more moon cycle; last week, the DNC announced a January 14 debate in Iowa. There will then be three February debates across the other early states — New Hampshire, Nevada, and South Carolina — shortly before each votes. None of these new debates have qualifying thresholds yet.

That being said, whether there will even be a debate this week is uncertain. Candidates are supporting a striking labor union that is scheduled to work the debate at Loyola Marymount University. All candidates, in solidarity with the workers, have pledged to not cross the picket line. Perhaps LMU will resolve the dispute by Thursday, or perhaps the DNC will get creative and hold the event elsewhere. If neither occur, we’ll be forced to get some sleep on Thursday night instead.

In the eventuality that there is a debate, however, PPFA is contractualyl obligated to preview it. Before I get to this debate’s seven candidates (yes, just seven!), there are some “major” candidates who won’t be on the debate stage:

I also think that the DNC not revealing qualifying thresholds for future debates is a good sign for him. Once the field naturally dwindles, the rule-makers might drop the donor requirements moving forward. I can see new requirements like:

That would allow Bloomberg into the debate while allowing other slow-growing candidates a way to survive as well.

On to the seven debaters! I’ll order them by viability for the nomination as of my most recent Power Rankings, and I will pair a debate strategy with each one.

Tom Steyer: How unfortunate to be a billionaire and yet not the wealthiest person in the race. Truly we must weep for poor Tom Steyer. The good news, I suppose, is that he’s the only billionaire competing in the four early states — Bloomberg is targeting Super Tuesday and beyond — so his plan to qualify through debates and gain traction in February may proceed.

Debate strategy: wear a funny tie, talk directly to the camera, blink as rarely as possible, write another check for an Iowa ad buy.

Though Yang has plenty of donors — indeed, he had enough for this December debate all the way back in the summer — his polling doesn’t reflect the #YangGang’s generosity. It’s a microcosm of his campaign: Yang is likable, has loyal support, and is thoroughly surpassing expectations, but few Democrats see him as a realistic nominee.

Amy Klobuchar: Klobuchar more comfortably qualified for this week’s debate than did Steyer and Yang. Polling earned her an invitation even before the November debate, and she’s even earned her eight qualifying polls among early states (six polls) and national ones (two). (Contrast that to Steyer, who has all four of his qualifying polls from early states, thanks to him spending millions in early state ads.) Even as the field winnows and attention is given to the Big Four, the billionaires, and the quirky Yang, Minnesota’s senior Senator is still there, plugging away, making her case for unsexy pragmatism.

Most promising for her campaign, the most recent poll out of Iowa had her up to ten points, just two back of Elizabeth Warren for fourth place. If she strings together a third consecutive strong debate, I suspect we’ll be talking about a “top five” in Iowa for the month of January.

Bernie Sanders: Continuing a theme from last month, Sanders continues to strengthen his position. Interestingly, though he has only climbed a couple points nationally and in the early states, his relative position to a falling Warren makes him look like he has twice as much momentum as he actually does. Here’s a look at Real Clear Politics’s rolling national averages over the last four months: 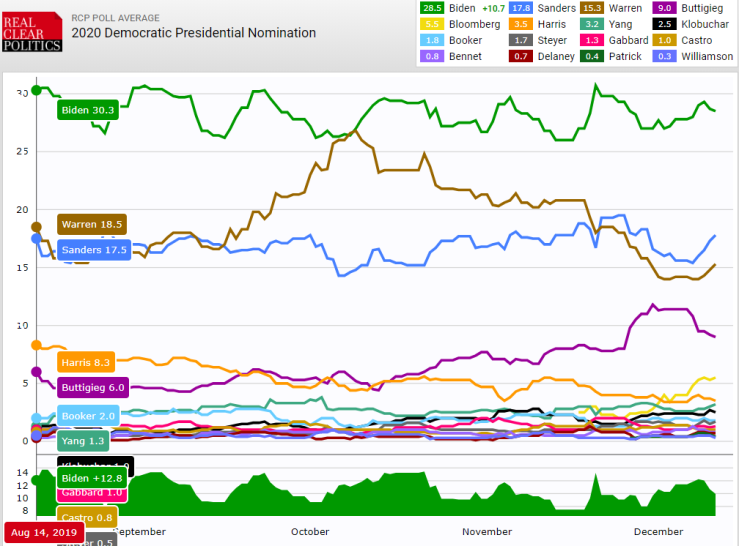 We should still see him as trapped in between 15 and 20 percent until he can prove otherwise. Still, in politics, how people perceive momentum is just as much if not more important than the quantifiable part of that momentum. That being the case, Sanders is looking good. He’s on the rise in Iowa and has nearly regained his late summer altitude in New Hampshire, so he remains in the thick of the race.

I continue to wonder what his Warren plan is moving forward. As we arrive in the stretch run leading to Iowa, will he continue to treat her with kid gloves, or will he try to draw a clearer distinction? Progressives could be forgiven for making a strategic choice heading into Iowa and New Hampshire, two states both Warren and Sanders are looking to win in order to be in the “Finals” against whomever emerges from the moderate lane. If either New Englander looks like the clearly stronger candidate, supporters of the other could be forgiven for abandoning their #1 to support the polling favorite, that way the Leading Leftist looks stronger against whomever the leading establishment candidate ends up being.

Debate strategy: So does Sanders go for the kill on Warren so he ends up being the progressives’ standard bearer and absorbing her support? Or does he still not want to wound her? Every debate I ask that, and every debate he answers with the latter. But maybe one of these times, as leftists across America look to their Caesar, he’ll give her the dreaded thumbs down, and then his legions on social media will unleash hell.

Pete Buttigieg: Mayor Pete’s ascent is now over, but he’s leveled off in decent position. As we see with the above national polling, he nearly reached double-digits nationally. Still, it’s the earliest states where he’s most impressive. He maintains the RCP average lead in Iowa, and he trails only Sanders in New Hampshire, where the two men have split the last four polls. Of course, his increasingly frustrating struggles with minorities leaves him well back in Nevada, South Carolina, and, presumably, the many southern states of Super Tuesday. (Indeed, you may have noticed he finished one qualifying poll behind Biden, Warren, and Sanders; that was due to a measly 3-point result in a South Carolina poll.) He simply cannot win the nomination without breaking through with African Americans, a courtship that’s getting more difficult by the week.

Debate strategy: He must pull off the impossible task of pandering to minorities without looking like he’s pandering to them, and he must do it while everyone is watching for the pandering so they can call him on it, thus undermining the goal of the pandering.

Good luck with that.

Joe Biden: In this first debate with an odd number of candidates, Joe Biden will have the privilege of being the first candidate to be in the dead center of the stage. I like that look for him. Most stories of Biden lately have acknowledged that no matter what kind of chaos happens around and below him, he continues to lead the field by a fairly comfortable margin in national polls.

Of course, his polling in the first two states aren’t nearly as strong. He runs third in both, and if Elizabeth Warren regains her mojo she could knock him down to fourth. It seems unlikely that he could finish third or fourth in the first two states and count on his support in later states to hold. The entire field is banking on his eventual polling collapse, with a handful of candidates just waiting to sponge up that support. (This paradigm, by the way, is precisely how the field and media assessed Donald Trump four years ago.)

With that in mind, Biden embarked on his “No Malarkey” bus tour around Iowa. To a Biden detractor, the hokey name appears like the latest example of a dotty old man running an anachronistic campaign, but I think it rather shrewdly pulls together several of his strategies:

Indeed, the field must hope that anyone else wins Iowa, be it Warren, Sanders, Buttigieg, or Klobuchar. I very much think that group is more likely to win the state than Biden is, but if he throws a good dart there, Biden is the nominee. No one else would run away with the primary if they were to win the first state.

Debate strategy: Therefore, you could forgive Biden for not trying anything desperate at Thursday’s debate. I suspect he’ll just stay on message in his typically unimpressive way. That message? “Hey, did you guys know I was Obama’s Vice President?”

Elizabeth Warren: Though Biden will be at center stage, it’s Warren who will have most of my attention. I expect this debate is just what the doctor ordered for the wounded Warren Campaign. Her tumble from top of the polls to third nationally and fourth in the earliest two states is striking, but there’s plenty of time to remedy the situation. A debate feels like a medicinal moment for her.

Debate strategy: She’ll remind Democrats of her sharp tongue, and perhaps this time she’ll finally swing some sharp elbows as well. Several of her opponents have landed blows on her in the last couple debates. It’s time for her to punch back. That is, after all, what “fighters” do. She needs to show voters that she can give as good as she can get, especially considering her looming general election opponent.

Enjoy the debate… if there is one.

2 thoughts on “Sixth Democratic Debate… If There IS One… Preview”