Though I was satisfied with my official debate preview from Monday morning, a few more polls leaked out in the last couple days, and I think they offer some extra layers of context for tonight’s debate. Below are five such contextualizations. I’ll list them in reverse order of importance, and, in the spirit of Quick Hit Fridays, I’ll keep most of them brief.

On Monday, a Quinnipiac poll out of South Carolina found Tom Steyer at 5 points. That gives him that fourth needed qualifying poll of 4+ to get into the December debate. He’s earned them all from early states of course, as that’s where he’s spent roughly eight trillion dollars on TV ads. However, he does not yet have the 200,000 requisite donors needed to qualify for the sixth debate:

Meanwhile, though Andrew Yang and Tulsi Gabbard do/will have the donor numbers, they’re still only on the verge of the polling half of the threshold. Yang hit four points in that same South Carolina Quinnipiac survey, giving him his third qualifying poll. Gabbard, however, remained stuck at three herself.

All are almost certain to qualify. Steyer can keep spending millions of dollars convincing people to donate him one back (as New York Magazine put it: “Tom Steyer Bought Himself a ‘Grassroots Campaign’ for $10 Million”), while Yang and Gabbard’s polling inertia should be more than enough. As a result, none have to get too wild tonight, but Gabbard remains someone to monitor for that third party potential.

4. The Last Gasp of Cory Booker

As that chart showed, even with the latest surveys, Booker has yet to hit the donor threshold or have a single qualifying poll for that sixth debate. His campaign is in its last breaths, which is weird for a clearly talented, in-shape candidate. At some point, there’s going to be an interesting post-mortem on his campaign. Why did it never get going?

That post-mortem will read that Joe Biden basically locked down the African American vote. Back when I discussed Booker’s initial entry, I outlined his strategy to win over the sizable fraction of the Democratic Party that is minority voters. That was supposed to be what happened. But when Biden entered the race, the former Vice President shot to the top of the polls, and he’s stayed there, largely buoyed by support from black voters who appreciate his role in Barack Obama’s presidency.

Of course, what’s notable here is that we’re reading a post-mortem while the body is still alive. In other words, Booker knows how he’s going to die, and he has a chance to stop it.

The only thing left for Booker to do, therefore, is to go after Joe Biden. And it has to be tonight.

3. And you know what would make a lot of sense? If Kamala Harris, also stagnant in the polls and needing black support, teams up with Booker.

It would be smart of them to broker a backroom deal. Neither can win as long as Biden’s on top. But if Biden falls apart, they’d both rise in the polls and have a shot down the stretch. If both Booker and Harris start picking on Biden tonight, that can be meaningful.

But will they do it?

2. The #PeteStorm might not be quite as strong as we thought.

And now we get to the leaders. (I’ll ignore Amy Klobuchar for this post, but PPFA readers know that no one should ignore Amy Klobuchar.) As noted on Monday, Buttigieg is in the midst of an Iowa surge, and his New Hampshire numbers don’t look half bad either. However, a couple recent surveys should temper the excitement of his supporters.

For starters, after two Iowa polls had shown him in the clear lead (one by 3, one by 9), the subsequently released CBS/YouGov poll showed a more compact leaderboard. Biden and Sanders had 22 points as the co-leaders, while Buttigieg trailed them by a point. Three points behind Buttigieg was Elizabeth Warren.

His immobility is largely due to a sizable anchor weighing him down, and it’s a familiar one — the African American vote. On Monday morning, I noted that the CBS/YouGov poll out of the state showed some potential for Buttigieg; though the pollster didn’t reveal a demographic breakdown, Buttigieg’s 8-point result in a state with a large minority population hinted at his long-awaited traction among black voters. However, the aforementioned Quinnipiac survey released later that same day did do a demographic breakdown. It had him at 6% overall, but his black support clocked in at less than one percent.

Most explanations for his lack of African American support point to poor minority relations as Mayor of South Bend, while a lot of polling out there suggests African Americans aren’t as comfortable with homosexuality as white voters. A gay president might still be a bridge too far for South Carolina blacks, even Democratic ones.

Let’s watch for overt minority outreach from Buttigieg tonight.

1. And finally: are the walls closing in on Elizabeth Warren?

For #2 above, you might have noted that surprising CBS/YouGov Iowa poll that showed Warren a surprising fourth in the field. That poll is just the latest in an easily overlooked downward trend for Warren. Below, FiveThirtyEight helpfully charted and averaged every Iowa poll since the fourth debate:

Though these numbers shake out to Warren as the average Iowa leader, we’ve seen her numbers fall from the 20s to the high teens. Buttigieg has skyrocketed, while Biden and Sanders hold steady. If anything, the latter two, particularly Sanders, are in a slow climb of their own.

Sanders, it’s worth noting, is for a couple of reasons set to become a huge wild card. For one, he’s catching Warren in many polls, reversing the momentum she’s held, relative to him, for quite some time. Importantly, it’s not so much that Sanders is rising to new heights as much as Warren is falling back to Earth. Take a look at their rolling national Real Clear Politics averages since May 20 — exactly six months ago: 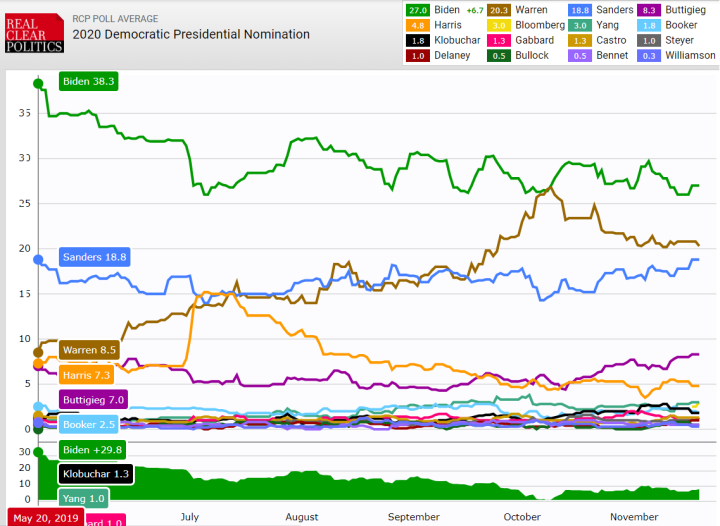 Meanwhile, after Warren’s five-month rise, she has since fallen back to Sanders levels. Sanders is also within a septuagenarian’s stone-throw away from Warren in Iowa, New Hampshire, and Nevada. There’s a decent chance he smells blood in the water. (Sanders Shark doo doo doo doo doo doo)

As I’ve said a dozen or so times this primary cycle, the two candidates are in each other’s way. One of these border-state Senators would probably run away with the New Hampshire Primary were the other not in the race. On the national level, they divide the Left between them almost evenly. Indeed, in Iowa, there’s evidence he’s siphoning from her very liberal support, almost as if it were a zero-sum game between the two.

Second, Warren’s recent softening of her health care policy should make the Far Left take notice, Sanders first and foremost. Though she obviously has an eye on being a viable general election candidate, in the meantime she might have some explaining to do to win over the left flank.

In other words, if ever there were a time for Bernie Sanders to break their non-aggression pact, this is it. He’s held power over the primary’s fate for some time. If Sanders actually wants to win, tonight should be the night he goes for being king of the Left Lane. (We shouldn’t discount the possibility that he’s just stringing his followers along, recognizing Medicare-for-All is an unrealistic expectation that would hurt the Democrats in November, and he ultimately doesn’t want to wound Warren’s candidacy.) Warren would then find herself in a two-front war: Buttigieg on her right, Sanders on her left. As always, the problem with trying to please all sides is that you truly please none. (Kamala Harris can tell you all about that.) (So can PPFA.)

Are you excited for this debate yet?? Let’s see what happens.