Tomorrow begins the confirmation hearings for Judge Brett Kavanaugh, President Trump’s nominee to fill Anthony Kennedy‘s seat on the Supreme Court. The Republican-controlled Senate will confirm him. When it does, conservatives will control the Supreme Court for the first time in a generation.

This is quite the reversal. A little over a decade ago, on the eve of Sandra Day O’Connor‘s retirement from the hallowed body, the court was comprised of four liberals (John Paul Stevens, David Souter, Ruth Bader Ginsberg, and Stephen Breyer), two moderates (Kennedy and O’Connor), and just three conservatives (Antonin Scalia, Clarence Thomas, and John Roberts). One or both of the moderates frequently sided with the four liberals to give them majority decisions. Even when George W. Bush appointed conservative Samuel Alito to replace O’Connor to make it four-four, a frustratingly liberal Kennedy, having spurned conservatives on numerous key issues — most notably LGBTQ and reproductive rights — lingered.

Thus, this rapid conservative takeover is a dramatic development, and, for liberals on the verge of finding themselves outnumbered on the bench — to say nothing of every other branch of the federal government and most state ones as well — it is a humbling one.[1]

Still, in a country that’s voting comparably and perhaps even more Democratic at the national level, this development is also confusing. Consider the following facts:

The short answer: the Constitution.

The longer answer was partially discussed in Part 2 of my Electoral College evaluation. The Constitution props up the power of sparsely populated, rural states. It does so in a couple key ways:

In the Senate’s counterpart, the House of Representatives — or what our founders considered the “people’s chamber” — things are a bit more democratic. Gerrymandering aside (which isn’t an inconsiderable loophole but not in this post’s purview), the House ties representational weight to population, so American citizens’ influence in electing the House is more democratic.[3]

However, the House doesn’t get a say in the Supreme Court process. The President nominates, then the Senate advises and perhaps consents. That’s it. That’s the process.

The rural citizen, therefore, has outsized influence over five-sixths of the federal government: the Senate, the presidency, and, as a result of those first two, the courts.

Note that so far I haven’t evaluated this model. I’m fairly certain all I’ve done is lay out the facts and their implications. I am starting to wonder, however, if this system will remain acceptable for much longer. As I said, momentum has shifted between the parties before, but there is evidence to suggest Republicans, if they remain the preferred party of the rural voter, might never give up this advantage.

Since then, however, rural America has dwindled to less than 20 percent of the population. This transition from rural to urban goes back a century and shows no signs of reversing: 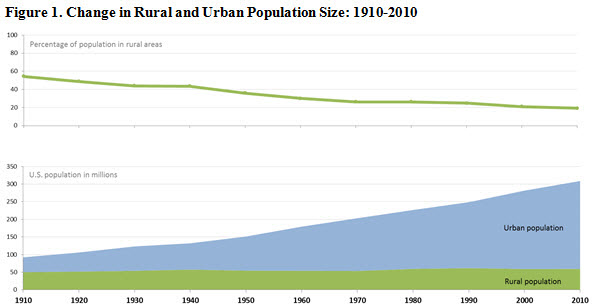 The American landscape has totally transformed since the founders’ era. As urban areas continue to clump together, this is going to be a long-term disadvantage for urban voters.[4] Recent projections from the University of Virginia’s Weldon Cooper Center for Public Service determined that by 2040, half the population of the U.S. will be found in just eight states. Politically speaking, that means half the population will be represented by only 16 of 100 Senate seats.

And the pièce de résistance? This potential slip into perpetual Republican dominance can now be crystallized by this conservative takeover of the Supreme Court. Once Kavanaugh gives conservatives control of the bench, it’s likely that the court would rule conservatively on gerrymandering, voter ID, and, if given a chance, the above electoral disparities. These are three issues that, if ruled on liberally, would curb Republican momentum. Meanwhile, with Democrats fighting against gravity in presidential and Senate elections, it’d be difficult to ever again swing the court back to the left. When conservative 70-year-old Justice Thomas moves on, he’ll likely be replaced by a conservative, and when liberal octogenarians Ginsburg and Breyer leave the bench, so will they. Unless Democrats start winning more Senate elections soon, the 2016 election likely set up the permanent era of a conservative SCOTUS.[6]

All considered, it’s increasingly clear that rural America, like a reborn Bacon’s Rebellion, is taking control of the federal government. What they’ll do with it remains to be seen, but liberals should brace themselves.

[2]Remember when we were talking about an alleged child molester almost winning the Alabama special election? That feels like a decade ago. It’s been nine months!

[3]In truth, there’s still a small advantage for the GOP in the House as well. In the past four elections, the Republican Party won more seats than they did share of the two-party vote. In 2012, remarkably, Democrats won more House votes than Republicans, but Republicans won 53.8 percent of House seats. The cause of these discrepancies: Democrats have a knack for running up the score in their district victories, while Republicans win more districts at smaller margins. This might seem innocent enough, but consider that the House makes national policy and maybe the people’s branch should reflect the will of the nation.

[4]To be clear, it’s already a problem for them. In addition to the aforementioned Senate and Electoral College disadvantages, these demographical issues also partially explain why Democrats are struggling so badly at the local and state levels. Though nationally there are more Democrats than Republicans, Republicans outnumber Democrats in more states, albeit less populated ones. They therefore have an easier path to controlling state legislatures and governors’ mansions, which gives them the advantage when drawing federal districts and enacting voter requirements that favor their party.

[5]Similarly, under the current model, it also feels inevitable that one day Americans will regularly cast more votes for Democratic Senate candidates but Republicans will still consistently control the Senate. Of course, a Constitutional amendment might one day re-calibrate the system, but guess how the Constitution gets an amendment…. It needs a two-thirds majority in each Congressional chamber, one of which is the rural-controlled Senate, and three-quarters of states legislatures, most of which are Republican and have small sizes that benefit from the current system. Remember, only eight states would control half the population, so it’s in the interest of most of the other 42 to maintain the status quo in the Senate and Electoral College.

[6]Did I mention elections have consequences?

17 thoughts on “The Rural Takeover of Washington”