Let’s embrace a distraction, shall we? While Donald Trump and Hillary Clinton give us an autumn event to remember, America only has one Fall Classic. Tonight, the World Series begins. It pits the two teams with baseball’s longest World Series droughts: the Chicago Cubs have not won since 1908, while the Cleveland Indians have come up empty since 1948. In fact, if it weren’t for the NFL’s Cardinals, whose last championship came in 1947, these would be the two longest droughts in all of American sports. And now the two teams go head to head. One of them has to win… right?

Here at Presidential Politics for America, we always look for ways to shoehorn history into our columns, so I thought it’d be fun to do a quick write-up of presidential politics in the years where these teams last won their title. After all, they were both presidential election years. Let’s get to it.

Republican Theodore Roosevelt, our 26th president, was winding down what was essentially his second term. His predecessor, William McKinley, was shot and killed in 1901, six months into his second term. At that point, Roosevelt himself had only been vice president for those six months. (McKinley’s first vice president, Garret Hobart, died in office from a heart attack, and he was never replaced.) When McKinley ran for re-election in 1900, Republican leaders pressured him into putting Roosevelt, the governor of New York, onto the ticket, mostly so they could get rid of him from New York politics, where he was trying to reform the Republican Party.

After the assassination, Roosevelt became president in September of 1901 and finished out the last 3.5 years of McKinley’s term before running for a term of his own in 1904, a dominant 56.6 percent to 37.6 percent win over conservative Democratic nominee Alton T. Parker, a fellow New Yorker. (Two New Yorkers running against each other for the presidency? Weird.)

President Roosevelt could have easily run again in 1908. For one, there was not yet a Constitutional restriction on terms. (That wouldn’t come alone until the 22nd Amendment in 1951, a reaction to Franklin Delano Roosevelt getting re-elected three times before dying in 1945.) Though there was the matter of tradition — George Washington, after all, had set the two-term precedent that no one had yet attempted to supersede — Roosevelt could have pointed to the fact that a run in 1908 would have merely been his second election as president. Though he had 7.5 years in office, the first 3.5 of those were meant for McKinley. Finally, there was the matter of his popularity, which was considerable. A run in 1908 was an assured victory, but he honored an earlier pledge not to push the office any further.

Interestingly, the 1908 Republican National Convention became the first to use primaries to select delegates — four states did so. Not that it mattered. Once Roosevelt backed his War Secretary, William Howard Taft, victory was assured. Taft won 702 delegates on the first ballot. The runner up had 68.

Over on the Democratic side, they figured their best chance was nominating someone who had lost twice before — William Jennings Bryan. Bryan, ever consistent, went on to become the only three-time general election loser in history. Taft won with 51.57 percent of the vote, topping Bryan’s 43. (Socialist candidate Eugene V. Debs peeled off 2.83 percent, the strongest showing for a Socialist until Barack Hussein Obama exactly one hundred years later.)

Forty years later, the 33rd president, Democrat Harry Truman, engaged in one of the great elections in American history. Like President Roosevelt, he had ascended to the presidency after the death of his predecessor. Coincidentally, that predecessor was Roosevelt’s fifth cousin, Franklin Delano Roosevelt, who died in 1945, three months into his fourth term. He left power to VP Truman, who was also just elected to the position in the prior election. The 1948 election was akin to Theodore Roosevelt’s 1904 bid — an attempt by Truman to win a term of his own.

I don’t think a sitting president has ever been more of an underdog in re-election. His own party tried to force him out in favor of World War II hero Dwight Eisenhower; the only reason that didn’t happen was Eisenhower’s refusal. Rejected, Democrats grudgingly turned to President Truman at July’s Democratic National Convention, some venting their frustration through campaign buttons lamenting, “We’re just Mild about Harry.”

To make matters worse, his party was in disarray. The more liberal policies of FDR and Truman worried the southern base of the Democratic Party. Dating back to the early 1800s, the party was the South. (Take another look at the electoral map from 1908 to see a partisan geographical divide which looks inverted from today’s perspective.) It had been a traditional, conservative party, but that was changing before their eyes. Though these two presidents tried to keep their party together through backroom negotiations, assurances, and deals (private position and public position, anyone?), it wasn’t working. In 1948, conservative Democrats bolted over the issue of segregation and state’s rights, forming the Dixiecrats led by Strom Thurmond.

Meanwhile, there were smaller elements in the Democratic Party who thought the party hadn’t shed enough of its conservative history and pushed the party to move further to the left. Truman resisted them, too, so they also split away and formed the Progressive Party led by Truman’s predecessor as FDR VP, Henry Wallace. In essence, Truman was left piloting the Democratic plane while wind shear ripped off both its wings.

On the other side of the aisle, the GOP showed no such turbulence. It had swept into Congressional power in the 1946 midterms, and in 1948 it again rallied around New York governor Thomas Dewey as its presidential nominee. (Four years earlier, he lost to FDR, but by the narrowest of FDR’s four margins of victory, a razor-tight 432-99 result in the Electoral College.)

Polls and publications had predicted an easy Dewey win all summer. Gallup showed Truman trailing by 17 points in late September. Pollster Elmo Roper declared “Thomas E. Dewey is almost as good as elected.” The Republicans were unified, the Democrats were a mess, and Truman was going down in history as an accidental president.

I once wrote a 93-page Masters thesis on what happened next and why, so you’ll be grateful that I aim to keep today’s post under 1,500 words. Truman’s famed “Whistle-stop Tour” took him on 31,000 miles of train track across the country as he stumped to save his presidency. While Dewey sat on his presumptive lead, Truman took a workman like approach by seeing and speaking to as many voters as he could, telling everyone to ignore the polls and media: “The smart boys say we can’t win. They tried to bluff us with a propaganda blitz, but we called their bluff, we told people the truth. And the people are with us. The tide is rolling. All over the country. I have seen it in the people’s faces. The people are going to win this election.”

Ultimately, though he used a coalition of labor unions, farmers, and African Americans to storm back into contention, the pollsters had largely given up on charting what they thought was a foregone conclusion. The expectation was a Dewey victory. The Chicago Tribune had even printed some post-election editions recapping Dewey’s victorious night. That error, of course, became the most iconic part of Truman’s surprise win:

Truman won the Electoral College 303 to 189 and nearly half the country’s popular vote (49.6%) despite the third and fourth party bids from Thurmond and Wallace. (Thurmond even won four southern states.) 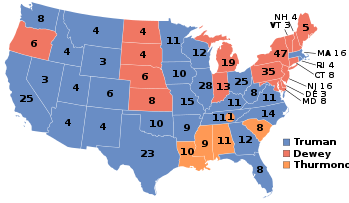 Harry Truman won his own term, and he did so convincingly.

For those rooting for a Hillary Clinton victory in two weeks, you want a repeat of 1908. Taft essentially became Teddy Roosevelt’s third term, riding his predecessor’s coattails into office.

On the other hand, Truman’s 1948 run is aspirational for Trump. Trump’s reasoning might be “Truman? Trump? I don’t know, folks, pretty similar names, if you ask me,” but there are important similarities. Both candidates were way down in the polls and fighting an uphill battle in the media, but promised that “the people” will win the election, not the “smart boys.”