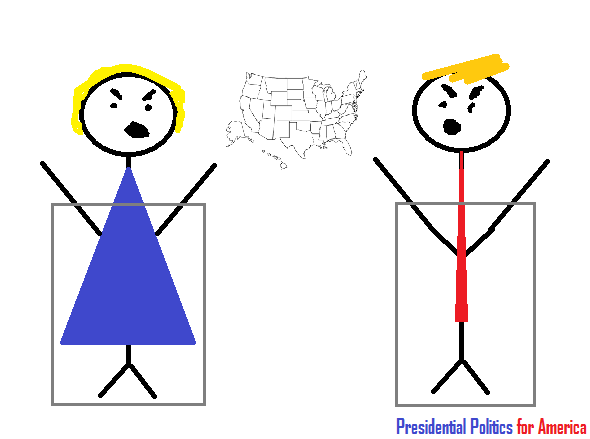 You can be forgiven for tuning out the painful cacophony that is the 2016 election. It’s been grating, depressing, and now, like my son, it’s 20 months old.

But it’s time to start listening again. In just seven weeks, you can become a fundamental instrument of our democratic republic — a voter. Hopefully, you want to be an informed one. The upcoming debates should be a factor when deciding between the two candidates or, alternatively, writing off both by writing in someone else.

The first of these debates is a week from tonight. (Sadly, Gary Johnson has not been invited.) It fascinates me for several reasons, enumerated below in question form for your convenience.

I unleashed my frustration with this phenomena in my most-read post of 2016, March’s “No, Trump Did NOT Have a Good Debate.” I wrote it the day after the Miami Republican debate in which we heard, among other embarrassments, Trump say the following on Social Security:

“Well, first of all, I want you to understand that the Democrats, and I’ve watched them very intensely, even though it’s a very, very boring thing to watch, that the Democrats are doing nothing with Social Security. They’re leaving it the way it is. . . .

After the Democrats slam, he eventually got to his answer:

“I will do everything within my power not to touch Social Security, to leave it the way it is; to make this country rich again; to bring back our jobs; to get rid of deficits; to get rid of waste, fraud and abuse, which is rampant in this country, rampant, totally rampant. And it’s my absolute intention to leave Social Security the way it is. Not increase the age and to leave it as is.”

You see this right?  Am I taking crazy pills?

This excerpt has the dual purpose of emphasizing how un-Republican the Republican nominee is while also demonstrating just how ridiculous it was that the next day people were generally praising his debate performance. Why was it praised, you ask? Because, unlike previous debates and fresh off a week where Trump and Marco Rubio sparred over the sizes of hands and other, more private anatomic features, Trump didn’t behave ridiculously. Not being ridiculous was the low bar he hurdled that night.

Is that the same standard we’ll hold him to next week? Trump, quite obviously, comes in with much lower expectations than the seasoned Clinton. No one expects him to know more than she does, and that puts him in a great position. He doesn’t have win on substance, just on style. And who knows — maybe he did enough debate prep to have some substance, too.

Still, it’s style we know he knows. After so many years as an entertainer, he knows how to sound and look. Even if he comes up empty in knowledge, he’s extremely effective in schmoozing. He knows when to smile, when to look stern, when to sound confident, and how to convey other mannerisms and tones that manipulate people into thinking he’s in control. If he has presidential tone and demeanor in the debate, undecided voters will be impressed and move to him. Huge Trump stakes here. We just don’t know what we’ll get.

2. What is Clinton’s strategy? Hillary Clinton, on the other hand, is a known quantity. As long as she doesn’t actualize Trump’s dreams and pass out from exhaustion or a debilitating illness, she’s going to show as a competent woman who knows her stuff, even if one disagrees with her positions. That’s never been in question.

What is in question is her strategy to take on her asymmetrical opponent. Will she ignore him if he gets silly or badly flubs on a question? Mock his lack of substantive knowledge? Stick to the issues? Get personal? Get personal only if he gets personal? Most broadly, will she take the fight to Trump or will she just respond to the moderator’s questions?

Another concern for the Clinton Campaign is clarity of message. Trump has a knack for being easily understood, because he speaks simply, rarely saying anything too complex or speaking in sentences groaning under the weight of their own details. Will Clinton, by comparison, sound too elitist and speak over the audience’s heads?

Let’s take another example from a Trump debate. This one is from the New Hampshire debate in the first week of February. (This is the debate where we were told, several times, to dispel with the fiction that Barack Obama doesn’t know what he’s doing. It turns out he knows exactly what he’s doing.) Ted Cruz was asked about his controversial comments regarding Trump’s temperament and replied: “I think that is an assessment the voters are going to make. And they are going to make it of each and everyone of us. They are going to assess who is level-headed, who has clear vision, who has judgment, who can confront our enemies, who can confront the threats we face in this country, and who can have the judgment when to engage and when not to engage — both are incredibly important for a commander-in-chief, knowing how to go after our enemies. . . . We need a president with the judgment and resolve to keep this country safe from radical Islamic terrorists.” Cruz used some high school vocabulary there — assessment, vision, judgment, confront, engage, resolve.

(Hang on…. Stifling guffaws….) “We’re going to win.” “That’s what the country is going to like.” People respond to that. People believe him. (Maybe it’s because he says to?) Clinton needs to find a way to connect on that level while also not ceding the intellectual upper ground.

3. What role will the moderator play? Lester Holt apparently drew the short straw and will be the first presidential debate moderator to get skewered from all wings of media for being too favorable to the wrong candidate.

Handling Hillary Clinton will not be easy. She has a long history of deftly pretending she’s already answered a question satisfactorily in the past, even if that answer was insufficient then and she contradicts it now. Holt and the later moderators will need to have verbatim quotes at the ready — I love the technique of showing the quote or video evidence on the screen — and be prepared to press her on these evolutions and misremembrances.

Handling Trump is even harder. The man talks in more circles than a NASCAR driver with his pit crew. A moderator must press him with follow-ups and specifics to see if Trump truly understands an issue.

For that reason, Trump will probably find these debates much more challenging than the ones from the GOP Primary. So far, I pulled examples from primary debates, but a general election debate will be colossally different because, among other reasons, there’s only two people on stage.

It’s funny — Trump boasts that he beat 16 people in the Republican Primary, including in debates and in actual voting. But really, having 16 other people in the field was a huge help to him. Back when his unfavorables among Republicans were sky high, a smaller field would not have allowed his early 15 to 20 percent to be at the top of the polls. It was the large field that allowed his fanatical minority to look dominant compared to everyone else splitting mainstream Republicans 16 ways. When it came time for the debates, his lead put him at the center of the debate stage, a psychological and visual advantage. Plus, the fact that there ten people on stage each competing for time meant Trump did not have to dive too deeply into policy.

For these upcoming debates, however, he’ll have to talk for two minutes on a specific topic and then (hopefully) face tough follow-ups and rebuttals. Although his supporters, if he fails at this task, aren’t going anywhere, swing voters might see his candidacy as a conman routine and stay away.

One week until we get answers! Fifty days until we have an election.

2 thoughts on “It’s Getting Real: One WEEK Until a Debate”