In the Election of 1796, the first presidential election without George Washington, the two most likely successors — Vice-President John Adams of the budding Federalist Party and former Secretary of State Thomas Jefferson of the Democratic-Republicans — found themselves skewered by segments of the press.

Benjamin Franklin Bache, grandson of his namesake, exemplified the charge against Adams with a pro-Jefferson newspaper, Philadelphia’s General Advertiser, later called the Aurora. He gave us our first “Elitist!” argument, charging that Adams “would deprive you of a voice in choosing your president and senate, and make both hereditary.” Bache asked his readers if they wanted, “this champion of kings, ranks, and titles to be your president.” As an example of Adams’s monarchical leanings, Bache warned that if Adams were elected, his son, John Quincy, would become president, too. (Lucky guess.)

The Federalists, however, were not to be outdone. They referred to Jefferson as an atheistic, anarchistic coward. An infamous Federalist description of the Jeffersonians described them as “cut-throats who walk in rags and sleep amidst filth and vermin.” The Gazette of the United States ran a letter that implicated Jefferson in an affair with one of his female slaves. (Another lucky guess?) Media bias in presidential politics was born.

It didn’t die. Four years later, in the rematch between Jefferson and President Adams, the Connecticut Courant warned of a Jefferson presidency in a way that makes you wonder if perhaps Donald Trump was a subscriber:

“Murder, robbery, rape, adultery and incest will all be openly taught and practiced, the air will be rent with the cries of the distressed, the soil will be soaked with blood, and the nation black with crimes.”

Republican newspapers aggressively countered. The Richmond Examiner labeled Adams a “repulsive pedant” who was, “in his private life, one of the most egregious fools upon the continent. . . . [He is] that strange compound of ignorance and ferocity, of deceit and weakness,” and a “hideous hermaphroditical character which has neither the force and firmness of a man, nor the gentleness and sensibility of a woman.” Hermaphroditical character!

Newspapers regularly took sides in this “First Party System,” a product of the famous Hamilton-Jefferson feud in President Washington’s cabinet. Indeed, a biased media was the norm; partisan writings fueled the newspaper business. These media biases continued throughout American history:

Of course, the closer we get to today, these tidbits get less funny and interesting and more frustrating and personal. Still, for the whole of presidential politics, to have a media is to have a biased one.

Is 2016 over the line, though? It’s hard to top “rape, adultery and incest will all be openly taught and practiced,” but we’d be hard-pressed to find an election in modern political history where the media has been more uniformly caustic toward a candidate than it is toward Donald Trump.

Now, there’s two dominant schools of thought regarding the media’s actions. One says that the media shouldn’t pick sides, and that it’s despicable that either the press has gone after Trump as much as it has, or that it’s gone after him more than it has Clinton. This school’s most notable professor is Trump himself.

It’s worth mentioning, here, that accusing the media of having a liberal bent is nothing new. In its entry on media bias, Wikipedia, which gets edited, checked, and rechecked by contributors of all ideologies, walks you through a sizable sampling of such charges, including examples and evidence, before listing a dozen high-profile authors who have taken deep dives into the subject to make their case.

Of course, if you scroll down from that section, you get to the “conservative bias” section, which lists examples of conservative media along with some explanations, counterarguments, and context for the ostensible liberal media bias, not the least of which is that blaming the liberal media is a conservative strategy. Trump is taking this strategy further. If he successfully invalidates the media, then it doesn’t matter what they say about him. He’d have free reign to say whatever he wanted without fear of admonition from a toothless fourth estate. In sum, his “biased media” campaign is extremely self-serving; even better, he gets to collapse it into a larger “rigged” accusation against the entire political system, which has coincidentally made a comeback in recent weeks. (He can’t lose Pennsylvania, a state carried by the Democrat for the last six elections, unless “cheating goes on”? Puh-lease.)

Now, the second school of thought says that Trump has earned nearly every bit of criticism thrown his way, and Hillary Clinton has actually received an appropriate amount of scrutiny. In other words, as The Atlantic writes, it’s his own fault that he continues to get most of the negative attention from the media, and if any presidential candidate behaved the way Trump has, the media would have had a field day just the same.

PPFA’s enrollment in this second school should not be surprising. If memory serves, I never said anything particularly harsh about Republican contenders Rubio, Cruz, Christie, and Kasich. In fact, I recall being mostly complimentary of them.

If one of them became the nominee, I’m confident this website could have done a relatively straight evaluation of his race against Clinton.

There were two GOP candidates, however, that I had trouble tolerating: Trump and Dr. Ben Carson. They both seemed out of their league. They had skills in their challenging fields, but they knew little of politics and less of policy. It was frustrating to see their rise in the polls against more experienced and knowledgeable candidates that could have given the Republican Party a genuine nominee, one that could not only accurately and fairly represent the nominating party, but also one that could have given the American people a more legitimate prosecution of Hillary Clinton. Their inexperience can be excused, but their ignorance could not. Consequently, throughout the primaries, I was harsh toward Carson and Donald J. Trump, thinking that once they were eliminated, I could hopefully manage some unbiased analysis of the general election.

But then one of them became the nominee. Now I’m here, unable to play it straight, admitting that while I’m no fan of Hillary Clinton, who will almost certainly not earn my vote, “I really, really want to see Donald Trump lose, more than I’ve ever wanted to see a candidate lose, and the bigger the blowout the more gratifying it would be.”

I think the media, which has unquestionably been harsh on Trump, arrived at a similar place, though it began at a different starting point. Early on, it was somewhat inadvertently Trump’s best friend. Just as he hacked disenfranchised Americans across the country and knew how they ticked, he hacked the media, too. He knew his cult of personality led to ratings, and ratings is the primary driver of content. The result was record amounts of free media — nearly $2 billion by Super Tuesday:

and $4 billion by the end of the Republican Primary. Compare that to what Clinton was receiving as the leader in the Democratic race, and it was no contest between them until we entered into the general election last month:

What’s more is that this coverage of Trump may not have been as harmful as you may have thought it was. The verbosely titled Harvard Kennedy School’s Shorenstein Center on Media, Politics and Public Policy found that in the primaries’ early stages, “major news outlets covered Donald Trump in a way that was unusual given his low initial polling numbers — a high volume of media coverage preceded Trump’s rise in the polls” and that “Trump’s coverage was positive in tone — he received far more ‘good press’ than ‘bad press.'”

With these conclusions in mind, I think there’s a good chance that the media feels guilty about facilitating Trump’s rise, which might explain some of their negative Trump coverage today. Florida Republican strategist Alex Patton agrees, offering that “What you’re seeing here is an overcorrection by the media in some cases. . . . I think the media realized they created Donald Trump. And when you look at the media bias starting to emerge and how Trump just dominated the media coverage in the primaries, some of this is the media going, ‘Oh damn, we’re responsible for this.'”

And if the fact that the media has been mostly useful for Trump doesn’t blow your mind enough, some argue that it hasn’t been as helpful to Clinton as Trump wants you to believe. Even setting aside biased, wordy, full-throated defenses of Clinton as more aggrieved than Trump at the hands of the media, there is still reason to think Clinton has had it rough. The Harvard Kennedy School found that in 2015, “Hillary Clinton had by far the most negative coverage of any candidate. In 11 of the 12 months, her ‘bad news’ outpaced her ‘good news,’ usually by a wide margin, contributing to the increase in her unfavorable poll ratings in 2015.” 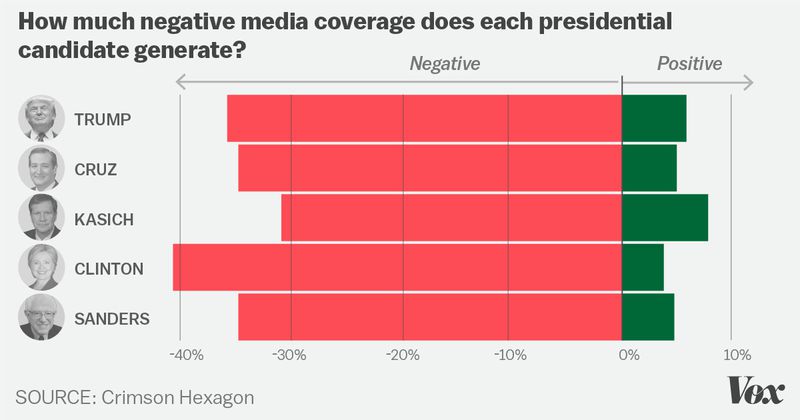 This counterintuitive finding will become an increasingly common drum beat from liberals in their media bubble, though it will be a preposterous and quickly dismissed idea for conservatives in theirs.

Also relevant is that it’s not just the liberal media (and PPFA) that has been critical of his campaign. In addition to Republican political defections piling up, tried and true conservative media outlets and personalities have refused to climb on board the Trump Train, even with the possibility of Hillary Clinton, for whom they share no love, waiting as the 45th president.

Leon Wolf of the conservative RedState.com, for example, lambasted Trump earlier this month with his: “Drop The Media Bias Crutch, Put On Your Big Boy Pants, And Do Better.” On the one hand, Wolf acknowledges the liberal bent of the media, but with his other he slaps Trump across the face for thinking it’s the media’s fault he’s doing so poorly. Wolf think that the media has been critical of Clinton, but the reason it can’t focus on her more is that Trump can’t get out of his own way: “The media, including traditionally liberal outlets like CNN have aggressively and openly and repeatedly called Hillary Clinton a liar for her responses to the email scandal. Every time a new revelation comes up, the media dutifully covers it and rakes a Hillary operative over the coals. The reason they don’t stay on these stories is because Trump won’t let them. . . . It isn’t just the email scandal, just look at how aggressively one specific liberal outlet (the Washington Post) has covered a relatively small scandal (for the Clintons), the Clinton Foundation’s ties to a shady Haitian mine deal.

“Look, Hillary Clinton did not get to be nearly as unpopular as Donald Trump just by wearing bad pantsuits. She is regarded as untrustworthy because the media has in fact reported many of the ways in which she has been repeatedly dishonest.”

And it goes well beyond RedState.com. The National Review is prominently anti-Trump. So is George Will. So is Glenn Beck. So is Bill Kristol. So is Mike Murphy. So is Joe Scarborough. So is everyone else an increasingly petulant Sean Hannity won’t forgive. These conservative critics are surely inoculated from RINO charges considering they’ve each been Republicans for decades longer than Trump has, including the years where Trump repeatedly praised the Clintons while these detractors denounced them. If people side with Trump over some of those names, they’re signing up for an entirely different set of principles than those of the modern Republican Party.

A Clinton Administration looms, but Republican voters nominated a candidate that many conservatives and Republicans can’t even pretend to like and say they’ll vote for. I think that goes to show you that the scrutiny toward Trump isn’t just liberal propaganda. It’s something quite deserved.

But hey, at least they don’t say he’s a hideous hermaphroditical character.

4 thoughts on “The Biased Media”