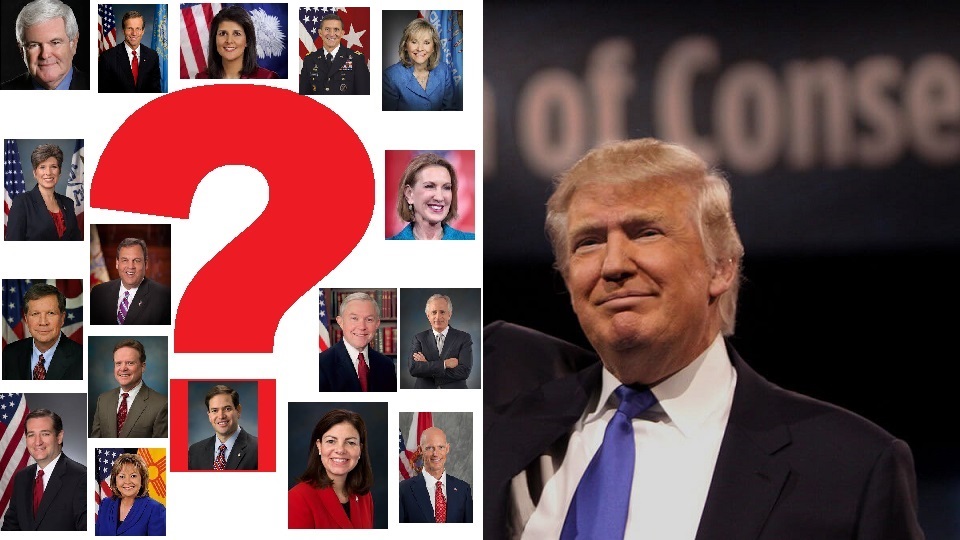 Who knows? We can’t rule out anything with this guy. Sarah Palin is on the table. Mark Cuban is on the table. American Pharoah is on the table. The table could not be more crowded. The Washington Post claims to have narrowed down his shortlist to a not-so-short 35. I’ve thinned it only marginally to 21. Knowing Trump, he’ll pick someone I haven’t listed.

Before I do my best to organize the massive list, let’s first remember:

With all that in mind, let’s get to it.

Like Hillary Clinton’s “Risks Identity Politics” tier yesterday, the members of this group each have admirable qualities deserving of examination and consideration, but I think aesthetics will outweigh them. Trump will want to avoid the perception that he is caving to politically correct pressure. For that reason, I don’t think these women will make the cut. Brewer is the most likely because her immigration stance mirrors Trump’s, she was an early defender of his, and she has publicly stated her interest in the VP slot. She’s also a private citizen now who doesn’t need to worry about re-election.

As for the rest, I ranked the governors lowest because they have no Congressional experience, and then I ranked them by worst to best history with Trump. Then came the two senators, with Ernst getting the nod because Ayotte will have a competitive Senate race to focus on.

There’s a lot of bad blood between Trump and this group with a lot of salvos launched in each direction. The Democrats could redirect those shots against both halves of the ticket after the announcement.

Kasich is the most likely because of his popularity in big, purple Ohio, but his message in the primary was pretty different than Trump’s. Carson has a similar message, but then the ticket would lack all sorts of experience. Cruz and Rubio have that Congressional background, but I also think they’re the sorest losers. I would have ranked Fiorina, who was a terrific campaigner and could be the ultimate Clinton attack dog, a few spots higher if she didn’t already accept Cruz’s offer as running mate. But she’s now lost twice, and Trump should be wary of a hat trick.

Good Picks, But Do They Want it?

All these picks are solid. Rice, as an African-American woman, helps Trump in his demographic weak areas, but she’s also unquestionably qualified and can legitimize the ticket in the arenas of foreign policy and national security. Rice’s experience as an international affairs heavyweight would inoculate the campaign from accusations of political correctness. On the other hand, she has shown no interest in politics and is a totally unproven campaigner.

Webb would be a creative, aggressive grab for the center. In the Democratic Primary, Webb was every Republican’s favorite Democrat. He ultimately withdrew citing his problems with the what the Democratic Party has become. On the issues, he has spoken out against affirmative action, he’s a defender of the Second Amendment, and he’s more critical of illegal immigration than his Democratic peers. He also came out against the President’s Iran Deal. Most relevantly, last month he ruled out voting for Clinton but is considering voting for Trump. To get a Democrat to sign on to the Republican ticket would undermine the Democrats while bolstering Trump’s perception as a man who cares about people before politics. Like, Rice, however, it seems pretty improbable. Though Webb has legislative experience, reaching outside of the party wouldn’t help with the Republican base, which would bristle at Webb being next in line for the presidency. He might be a tolerable Democrat, but the noun is more important than the adjective.

Rick Scott was one of the earliest prominent Republicans to endorse Trump, and he can help deliver the biggest swing state in the election — Florida and its 29 electoral votes. For those reasons, it feels like he should be top five on this list. On the other hand, he has no legislative experience, and there’s probably a reason he took himself out of the running.

Thune and Portman are just outside of my “Contenders” tier. Both have a lot going for them, most notably that they have Congressional experience and are highly respected in the Republican Party. Portman edges out Thune because he comes from the big purple state of Ohio. Why, then, aren’t they contenders? Frankly, they probably don’t want the job. Thune is on the presidential track himself, and tying himself to Trump could derail him. Meanwhile, when Portman was asked about his interest in the position, he basically said, “Nah, I’m good.”

I think this is his best choice, if not a realistic one. In 2012, Flynn was appointed by President Obama to serve as the director of the U.S. Defense Intelligence Agency. In 2014, however, he abruptly quit, became a critic of the Obama Administration, and has since become an adviser to Donald Trump. Trump clearly wants to make this a national security election (wisely), and bringing on a general and intelligence guru would be a way to validate the ticket in that regard. On the other hand, not only does he have no legislative experience, he has no political or campaign experience either, so he seems an unlikely choice.

He was the first big (apologies) Trump endorser, and he has stuck by Trump’s side though thick and thin. If Trump prioritizes loyalty above all  other factors, Christie’s the pick. Christie is also apt to want and accept the VP offer since his own political career is over; his New Jersey approval rating last month was just 29 percent. Best case scenario, tying himself to Trump makes him the vice-president, and worst case does nothing detrimental at all. At the very least, a Trump victory lands Christie a cabinet position, most likely Attorney General. Perhaps Christie’s greatest strength is his authenticity. Both candidates went through the primaries claiming to “tell it like it is.” Christie can be an aggressive, effective campaigner, fitting Trump perfectly.

However, Christie has never been the legislator Trump says he’s looking for, so I have to keep him out of The Favorites.

It was hard to rank him just third, honestly. He’s a legislator who serves as the Chairman of the Foreign Service Committee, which fills multiple gaps in Trump’s experience. His chairmanship made it that much more relevant when Corker offered effusive praise to Trump after his foreign policy speech. The two have also met privately. Finally, he is respected by Republicans on the Hill, so a Corker selection could help mend the relationship between Trump and insiders. He looks perfect. So why just #3?

It seems he’s joined some of his Republican colleagues and backed off that early Trump support. “I continue to be discouraged by the direction of the campaign and comments that are made,” he said. On Monday’s controversial Trump speech, Corker believed it was not “the type of speech that one would give that wants to lead this country through difficult times.” He also was forced to contextualize his earlier praise of Trump, saying, “In an effort to be constructive, I have offered public encouragement at important times, but I must admit that I am personally discouraged by the results.”

I think we know what Trump would think of such comments.

Unlike Corker, Sessions has not only maintained his support for Trump, he’s helped carry his water. Trump has been very complimentary of Sessions, including saying he would consider him for running mate, ever since Sessions became the first senator to endorse him. Sessions has since led Trump’s foreign policy team. Even as Republican lawmakers struggled with the Trump nomination, Sessions came out and said it would be “an honor” to be his running mate. Plus, in Alabama, the most crimson of red states, his Senate seat would be safe with a loss in the presidential race, and it’d be safe for Republicans in the next election with a win.

The only argument against Sessions as the most likely pick is something he identified himself — he doesn’t help Trump win. A southern Republican who’s the closest senator to Trump on immigration might excite the roughly 40 percent of Americans who are supportive of Trump, but it it does little to change the 55 percent of Americans who, according to the most recent Bloomberg poll, say they could never support his candidacy.

Instead, Trump needs someone who can go out and change minds.

Much has been made about Trump’s various inexperience and weaknesses, but maybe the most important weakness of all is a lack of elucidation. His speeches and interviews resemble blunt objects, useful for cudgeling but never for caressing. Meanwhile, though his unpredictability can bring valuable asymmetrical warfare to his political message, his lack of party discipline, though refreshing for many of his voters, is maddening for insiders.

Enter Newt Gingrich: the ultimate elucidator, message man, and insider. Democrats think Bill Clinton was behind the success of the 1990s. Republicans say it had more to do with the Republican Congress led by Speaker Gingrich, the Speaker of the House and cosigner of the “Contract with America.”

No one has more experience grappling with the Clintons than Gingrich does, and his mind is second to none in Republican politics. Importantly, his persona shares key characteristics with Trump, as told to us by the National Review: “He has an uncanny ability to dominate the media and shape a narrative, and he harnessed the anger and anxiety of lower-middle-class whites to reshape the Republican party. If the description fits Donald Trump in 2016, it applied equally to Newt Gingrich in 1994.”

But just as important as this spiritual connection with Trump and his base, Gingrich can go out and sell Trump’s message to party insiders, too. He led the party to success before, and he can do it again. His speaking ability can also go out and seduce the swing voters that Trump has been steadily losing control of, and he’d do it not by moderating Trump’s message, but by better explaining it and making it sound like the most rational message on the ballot. Simply put, Trump needs Gingrich, and Gingrich’s run four years ago shows us he’s itching to get back into the game.

So who will it be? We’ll know in a month. Stay tuned.