Thirteen months ago, when Bernie Sanders announced his candidacy in Washington, fawning onlookers dutifully recorded notes after their editors made them show up. Shots below. 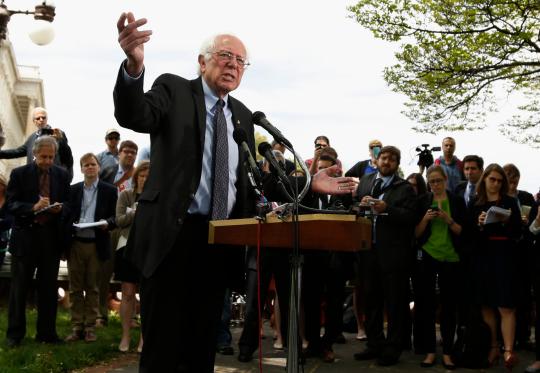 There were dozens of them. Dozens!

Quite the contrast from the headline image, isn’t it? Reporters made up a majority of those in attendance. Tucked under each of their notebooks was the memo about Hillary Clinton’s coronation, a memo never received by the man to whom they were ostensibly listening. This guy doesn’t stand a chance, they thought. In fact, when Sanders became Clinton’s first opponent, one idiotic blogger noted that “Hillary finally has competition . . . kind of.” He wasn’t even a Democrat, and he was going up against the crown princess of the Democratic Party?

I till no new soil when I say that Sanders proceeded to surprise everyone by, just as Donald Trump did, tapping into the intense frustration of the electorate and what it considered a rigged media and political system. Both Sanders and Trump spoke directly to the voters more often than navigating the traditional routes of politicking. Remarkably, both candidates lacked loyalty to their party (only running with each because they needed the banner of a major party to be viable), and yet that was one factor that so ingratiated themselves with many voters in and out of those parties. Indeed, for both men, it was attracting new voters, not just traditional one-party voters, that made them so potent. They seemed to have an almost impossible level of authenticity for modern politics. Being told the truth — or at least their version of the truth that no politician had dared to utter — felt fresh.

Of course, despite similar underpinnings to their success, these two candidates faced different fates in their respective primaries. While both created a large and devout base of followers, Trump’s looked a lot more impressive because he had sixteen different candidates splitting the rest of the vote. Even before Trump got in the race, 2015 opinion polling for Republican favorites Jeb Bush, Scott Walker, and Marco Rubio was never all that strong. Bush’s national Real Clear Politics high-water mark was 17.8 percent (July 13), Walker’s was 17.3 (April 1), and Rubio’s was 14.3 (May 11). At no point did any candidate earn even a fifth of Republican support until Trump did it at the end of July. From then on, he led the polls (and boy did he let us know about it) and enjoyed the perks of frontrunner status.

Sanders, on the other hand, never had a chance to be the front-runner. Hillary Clinton enjoyed numbers in the 50s and 60s, and her air of inevitability stifled the early money and viability that any other candidate, including Sanders, would have needed to overcome her national numbers before the primaries themselves. While Trump accurately pointed out that it’s tough to run up big polling numbers when the field is huge, he omitted that a huge field meant his faithful foundation of 20 to 30 percent towered over that massive, divided field, whereas Sanders’s base — similarly sized and producing comparable decibel levels — could never rise to Clinton’s numbers.

And yet, just like Trump, we underestimated him, despite his warning. Like Team Trump, Sanders and his supporters plugged away, blocked out the haters, shouted to anyone who would listen (and those who wouldn’t), absorbed harsh criticisms from others, and remained firmly committed to the cause. Then, not only did he start challenging Clinton in national polling — beyond unthinkable a year ago — but he even won some states early. And then he won states in the middle. And then, even after the mathematics all but eliminated him, he kept winning. What a ride.

But should the ride be over? It certainly seems so. Today — when primaries are held in California, New Jersey, New Mexico, Montana and the Dakotas — will be the last time he can win anything. A week from today is the Washington DC Primary, which Clinton will win comfortably, and after that remains only the convention. Clinton supporters have already become frustrated with his presence and rhetoric, and if he decides to stay in for the seven weeks between now and the convention, they will grow appalled.

Why does he stay in and damage Clinton?  His continued presence can be attributed to several factors.

First: Inertia. Over the last five states, he’s won four and fell only half of a percentage point short in the other. This was after he had been written off. On the Republican side, by comparison, Cruz faded over the last month until the Trump Star vaporized Cruz in  Indiana. But with Sanders, the more we were told Clinton was the nominee, the more powerful he became. Against all reason, he grew stronger as the primary aged, the democratic-socialist version of Benjamin Button. It’s tough to stop that kind of momentum.

Second: He and his supporters don’t seem to fear a Donald Trump presidency nearly as much as mainstream Democrats do. We too often get stuck placing our politics on a left-right spectrum, like this one:

Under this paradigm, one would think voters would vote for the candidate closest to where they fall on the spectrum. If Sanders is far left, Clinton is center left, and Trump is center right (or wherever he is on any given day), a Sanders voter would presumably race to Clinton if Sanders has no path to the nomination. Moreover, they’d consider the damage they were doing to Clinton in the meantime, since they risk the conservative party getting control of the White House.

But it’s not a simple left-right spectrum, is it? There are other ways to chart political ideologies. There’s this square, this diamond, and whatever the hell this is. For a hypothetical PPFA original, consider what I’ve drawn below, a political concept which might apply to some Sanders supporters:

If accurate — and like most other ideas on this website, it’s almost certainly not —  this chart reflects that many Sanders supporters would not necessarily run to enthusiastically support Clinton. In fact, as the crow flies across this completely unscientific plane, Trump is closer to Sanders than Clinton is. If Sanders supporters see it anywhere near this way, you can’t fault them for “Sanders or bust.” As for Sanders himself, he’s only been a Democrat for eight months, so it’s understandable why he lacks loyalty to the party and could care less about Clinton’s two-front struggle.

Third: Miracles can happen, and Sanders is counting on one for the nomination. However, I’m not sure even divine intervention can make 2 + 2 = 5, and that’s the kind of math Sanders needs to win. Let’s go over his remaining paths to victory in order of least to (relatively) most likely.

Sanders is 291 back. Today has 635 delegates at stake. Sanders therefore needs to win 464 delegates to Clinton’s 171 to take a two delegate lead. (And there will still be Washington DC the following week, which Clinton will win going away, so she’d take back the lead anyway.) That’s 73 percent of the day’s delegates. Of Sanders’s many wins, only four have been by at least 73 percent. One was his home state, and the other three were caucuses. Today’s contests are five primaries and one tiny caucus (North Dakota). He probably won’t win any of them with 73 percent, to say nothing of an average of 73 percent across them all, so this path is out.

Slightly more likely: Convince enough superdelegates to switch sides regardless of the national pledged delegate results. Two tactics here. First is to get the superdelegates to reflect the will of the pledged delegates in the many states that he won. That won’t get it done either, though. CNN shows us that whether awarding a state’s superdelegates as winner-take-all to the state-wide winner, OR awarding them proportionally, OR removing them all together, Clinton retains a massive lead.

So superdelegates in his states are not enough. He’s going to need superdelegates to switch to him en masse, even in states Hillary Clinton won by a lot.

Even though this would go against the more democratic process he promotes, let’s run with it. Why would they do that? His pitch is that they should vote for him because he’s doing better in head-to-head polling against Donald Trump than Clinton is. (This was John Kasich‘s argument that worked so well.)

But count me among those who think general election polls at this point should not be given too much credence. Sanders polls better because he’s been given a free pass by Republican attacks, unlike Clinton, who has had the everything but the kitchen sink thrown at her. They let him skate not because he’s unassailable, but because they’re dying to run against an actual socialist.

Plus, superdelegates, who are party insiders, aren’t looking for reasons to switch to the guy who has criticized their party for years. They’ll look for any excuse not to do it. Such excuses can include the fact that Clinton will end up with more total pledged delegates and more total votes.

The most likely: A Clinton indictment! If she is indicted over the emails, the party will reassess. The superdelegates can pull their support for her before the convention and keep her under a majority on the first ballot. At that point, all delegates are free to vote for whomever they choose.

But you know what? I still don’t think they go for Sanders. There’s too much bad blood, and I think they genuinely hate his chances in the fall. So to whom would they turn?

Why, Vice-President Joe Biden on his white horse, obviously! Elizabeth Warren as his VP placates the far left, and away we go into November.

So yes, Sanders’s best case scenario can result in a person who never even ran beating him.

For those reasons, if he sought PPFA’s advice, I’d first applaud him for sticking it through the primaries, giving every American a chance to vote for him. Win or lose California, at least the nation’s most populous state got a chance to weigh in. But I’d also tell him his impossible vision of winning over superdelegates would serve no purpose other than to degrade himself, forcing him to suck up to the very establishment against which he’s made a career fighting. Instead, it’s time to wave one last good-bye to his adoring flock and deliver one last swan song before the end of his campaign.

None of this post means to belittle Sanders or his supporters for sticking it out. It’s not only his right to fight for what it’s important to him, but it can be argued that it’s his duty. His conscience demands it. Also admirable is that, like Trump, he galvanized millions to be active in the political process. Their supporters are more passionate for their candidate than I have ever been about one, and we shouldn’t belittle them for wearing their hearts on their sleeves and believing in the power of a social movement to effect political change, the very embodiment of the democratic process. Somehow, Bernie Sanders, a kooky septuagenarian from Vermont, activated the political minds of millions of young Americans, and inspiring the youth is a great thing.

And to think, just over a hear ago, he announced his candidacy in front of a small gathering required to be there. Boy, did we underestimate him.