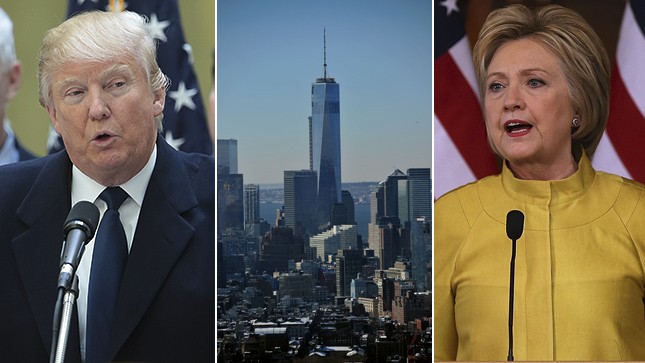 Here are the latest results from New York’s minute::

Trump will probably come in at 90 delegates, a figure I predicted as early as two weeks ago and again on Sunday, while Clinton’s 57.9 percent is a couple ticks higher than the 56 percent I predicted for her yesterday.

How much did each of our five remaining candidates enjoy their New York result? Here they are, ranked by worst to best night:

A New York State Unkind, indeed. It looks like Cruz limped across the finish line at under 15 percent of the vote. His pitch as the Trump alternative took a hit. Worse yet, it’s not looking much better in the upcoming states. Next week will be Connecticut, Delaware, Maryland, Pennsylvania, and Rhode Island; he won’t win any of them, and he’ll likely finish in last place in most of them. By the end of this month, he’ll have fallen out of mathematical contention for 1,237 before the convention. Will he have any oxygen left to regain his stride in May and June to force a contested one?

I considered putting him last in this ranking, but hey, at least he won over 40 percent in the state that twice sent his opponent to the Senate. That keeps him out of the basement. There’s not much else to like, though. Despite outspending the Clinton Campaign by more than 2:1 in the state, it was Scenario 2. The delegate math has never looked worse.

Now the question is — what does the Sanders Campaign do next? We got mixed signals last night. On the one hand, Jeff Weaver, Sanders’s campaign manager, was on MSNBC saying they’re going to keep making plays across all the states and expect to do well in all of them. He also said even if they don’t win pledged delegates or the popular vote by the end of the primaries, the campaign would still look to turn superdelegates by arguing Sanders can do better in November. Frankly, I don’t think he believed what he was saying even as the words were coming out of his mouth. He just wants to keep the coffers full until they figure out what to do.

On the other hand, another top adviser to Sanders, Tad Divine, said the campaign would go play to the liberal northeast states next weekend, but then they’d “sit back and reassess.” Meanwhile, Bernie Sanders unexpectedly returned to Vermont to get some sleep, which is normal for most septuagenarians but not for ones needing to win four or five states six days from now.

So what is the plan moving forward? If he tames his rhetoric and drops out relatively soon with some semblance of goodwill with the Clinton Campaign and Democratic Party, he still has some influence over the process. He can shape the platform, get a big speaking spot at the convention, and maybe even have a hand in the VP choice, as his blessing would be helpful. Or, he can go down fighting. He can empty his massive war chest against the prohibitive front-runner and almost certain Democratic nominee in a hopeless prayer that he could change superdelegates’ minds this summer.

In other words, will he stay a Democrat or does he go back to being an Independent because most of the party preferred someone else?

Hey, he did something Ted Cruz couldn’t do last night — he won some delegates! He even beat Trump in his own Manhattan. His four or five delegates were the best he could do in his quest to hold Trump under 1,237. He’s still making a play for a convention that goes past the first couple ballots. I think I’ll have have a John Kasich post coming up, so stay tuned.

Remember when the media was blowing his two weeks leading up to Wisconsin out of proportion, culminating in burying him after the state’s primary? That was fun. It also feels like ancient history. For the record, I did my best to temper that excitement.

The main Trump story from the night, aside from his 90-delegate dominance, is that his speech continued the recent trend of a remodeled campaign. After bringing in yeomen of the Republican establishment, his tone and aggressiveness has changed considerably.

His Twitter feed calmed down. He cleared the air with Megyn Kelly. He isn’t spouting off his repetitive know-nothing responses on every Sunday morning talk show. Even his relentless attacks on the “rigged” primaries can be viewed, if you really want to see it, as a selfless crusade against the establishment and not self-serving rhetoric. And then in his victory speech last night, there was no obsession with polls. There was no “Lyin’ Ted.” There was no “Kasich needs to stop stealing my votes!”; instead it was “Senator Cruz” and “Governor Kasich” are trailing badly. And he’s right. They’ve never looked smaller in his jet’s rear-view mirror.

For the moment, it seems as if Donald Trump is turning… wait for it… politically correct.

Of course, once he squares off against our next candidate, all bets are off.

1. A Night of Classic Clinton:

Ultimately, Clinton won New York similarly to how she’s won most the Democratic Primary. The exit polls tell us that:

With delegate math firmly on her side, and her opponent almost certain to be Donald Trump, Betfair has pushed Clinton to her most favorable general election chances yet:

The other betting markets agree; she’s around a 2/5 favorite (you’d bet five dollars to win two) to win the general election. In PPFA’s sharky opinion: 1) Buy low on Trump, who’s almost certainly going to be the nominee and could get you five dollars for every dollar you bet on him today. 2) Don’t invest a penny in Clinton as a 2/5 favorite, because most of the country does not like or trust her. 3) Kasich is worth a 40/1 long-shot bet if you have a hundred bucks laying around and want a shot at four grand. A third ballot at the convention is probably all you need.

Last night, in what were pretty familiar tactics, Clinton continued her pivot to the general election while also trying to squash Sanders and politicizing any person she could get her hands on. In the same speech where she said, “The race for the Democratic nomination is in the home stretch and victory is in sight” — a pretty heavy-handed gesture to Bernie Sanders to take the pill marked chill — she invited the daughter of the slain Sandy Hook principal Dawn Hochsprung to her speech so she could link the tragedy and more stringent gun control, a rare issue where Sanders falters with liberals, and an issue of particular concern to my home state of Connecticut, who holds a primary next week that Sanders can win.

On the 26th, with Connecticut we’ll have primaries in Delaware, Maryland, Rhode Island, and the next big prize — Pennsylvania. Now we wait to see how badly Sanders wants to win them.