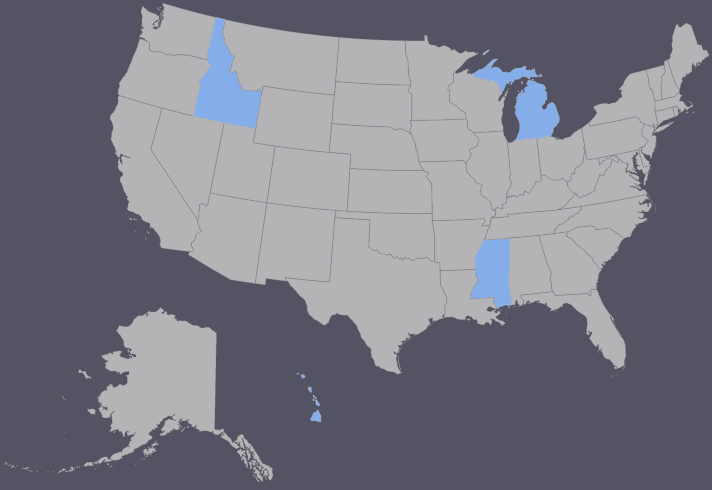 There’s barely any time to breathe in between primary days. More often than not, it seems there are either upcoming contests to preview or completed contests to unpack. Is anyone enjoying themselves as much as I am? I just took a look at my posting history. From January 25th through today — a period of 44 days — I’ve only gone only three days without posts. Over those 44 days, there have been 54 posts, as some days required two or even three. Thank you, tumultuous Republican Primary!

Today, we get four more states, and they’re all over the map. Michigan is up north in the rust belt, Mississippi is down in the evangelical south, Idaho is out west, and Hawaii is in the middle of the Pacific Ocean. You can’t get much more geographically diverse. (The Democrats only allow us half of those — the two M states. Hillary Clinton will win both – although Sanders has made up serious ground in Michigan — and pull further away from Bernie Sanders.) They total 150 delegates, about 40 percent of which comes from Michigan alone.

The stakes are high for each candidate. Consider:

With the candidates behind us, let’s get to the states.

Rules: If anyone earns a majority of the state-wide vote, he gets all 59 delegates. Short of that, all candidates who earn 15 percent or more of the vote are allocated delegates proportionally. No district delegates here.

Polls: Michigan has been the most polled state since Super Tuesday. Real Clear Politics counts the last four in its average, which reveals Trump 37.3, Kasich 25.0, Cruz 19.8, and Rubio in last at 10.0. The trends are all over the place. Trump has bounced around from 31 to 41, Kasich from 21 to 33, and Cruz from 15 to 23. Rubio has been trending down, down, down — from 16 to 13 to 11 to 9 and now 8. This is after approaching 20 on Super Tuesday. Luckily for the establishment, all of his support has seemed to go to Kasich, who was at just 12 on Super Tuesday.

Prediction: Rubio will probably finish under 15 percent and miss out on delegates from the day’s largest state. That hurts, especially considering his three rivals will come away with a double-digit number. The polls say that Trump seems a minor threat to reach 50 percent to sweep all 59 delegates, but he’s in the middle of a bad news cycle, even for him, so I think he’ll be held considerably under. Kasich and Cruz have a tremendous battle for second, but they’re so close that they’ll come away with a similar amount of delegates anyway. I’ll give the edge to Kasich as the state fits his message better than Cruz’s does.

Rules: There are 12 district delegates, 3 each for the 4 districts; if a candidate receives the majority of the vote in a district, he gets all 3 of its delegates, but if no one does, it’s 2 and 1 to the winner and runner-up. The 28 at-large delegates are divided proportionally between all candidates who earn 15 percent of the vote.

Prediction: Rubio is on the precipice of yet again receiving no delegates, and I don’t think he will. This is most assuredly not Kasich country. Cruz is going to skyrocket. Trump and Cruz will come away with all 40 delegates and pull further from the pack. Trump with the win over an ascending Cruz. Rubio desperately wants to hit 15 percent — something to keep an eye on.

Rules: If anyone earns a majority of the state-wide vote, he gets all 32 delegates. Short of that, all candidates who earn 20 percent or more of the vote are allocated delegates proportionally. No district delegates here.

Prediction: Feels like a Cruz state, am I right? It also feels like a state where Rubio and Kasich can’t clear 20 percent. Trump and Cruz again come away with all the delegates as Cruz pumps his fist. The two-man race narrative gains strength.

Rules: Proportional by district (2 districts with 3 delegates each for 6), and state-wide delegates (13).

Poll: None. Pollsters probably tried, but Hawaiians were way too busy loving life to care about how big Trump’s hands are. Polls close at 8pm local time, or 2am on the east coast. I will not be staying up for it. Frankly, Idaho is also unlikely. I teach students at 7:25 in the morning!

Prediction: I have no idea what Hawaiians think of all this, but I’d love to try. Remarkably, it’ll probably be the only state where Rubio gets any delegates in what is turning out to be an awful Tuesday for him. The only way he saves face is with a win in the Aloha State. Maybe he does well with islanders? But I don’t see a real reason to believe in a big Rubio win here; at least Puerto Rico was Hispanic. If he does win, it won’t be by much. The state could go to Cruz, on account of his success with caucuses and an endorsement from the only Hawaiian Republican state senator. I don’t see Trump winning, despite his national lead. Hawaiians could care less about his southern wall, and their Asian-Pacific flavor doesn’t merge with Trump’s base. Kasich will also pick up a delegate or two, considering Hawaii might have the country’s most liberal Republican Party. In sum, it’s only 19 delegates and all candidates should scratch out at least one, so don’t expect a lot of blood to be drawn here. Rubio’s win, for aesthetic purposes, is one thing to watch out for, as is Cruz finishing ahead of Trump to contain him.

1 thought on “Michigan Primary (and others) Preview”