I guess we shouldn’t have thrown out that Clemson “outlier” poll after all. Of the last ten polls before South Carolina, which dated back two weeks, Clinton led nine of them by between 18 and 29. The other was Clemson’s 50-point spread. Her ultimate winning margin last night was 47.5. Nice job, Clemson! If only the Tigers were having that kind of success.

Her resounding triumph handed her 39 of South Carolina’s 53 delegates, while Sanders secured 14 thanks to proportional allocation. With the Palmetto State now behind us, let’s take a look at the latest Democratic Primary Standings heading into Super Tuesday.

(Author’s note: for a far-too-detailed look at why delegate projections don’t speak with one voice, click here.)

CNN, using its own superdelegate count:

Green Papers “Hard Count” (Doesn’t count superdelegates; doesn’t count the Iowa or Nevada caucuses, which did not have binding votes for president. These are only bound delegates.)

Now we turn to Super Tuesday, which is a more concentrated SEC Primary than the Republicans even have, since, in addition to the Democratic states, the GOP also has Wyoming, North Dakota, and Alaska scheduled: 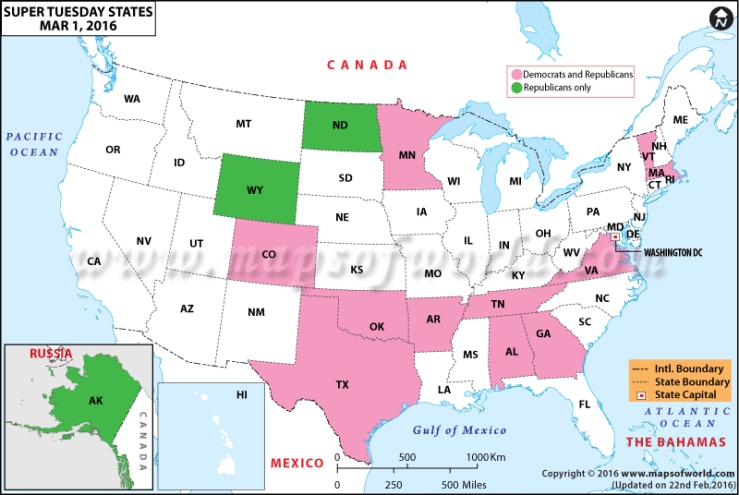 Much hay has been made about Trump and Cruz’s strength in the SEC states, but Clinton, too, sees these regions as a huge advantage. Here are Tuesday’s Democratic contests and their pledged delegation sizes:

Alabama, Arkansas, Georgia, Tennessee, Texas, and Virginia are sizable states where she can run up the score, just like she did in South Carolina. Clinton’s big win last night is a sign that Super Tuesday will also break dramatically toward her. Much of this success stems from the African-American vote, which is more concentrated in the southeast part of the country. Consider these South Carolina exit poll statistics:

African Americans didn’t care that an African American wasn’t running. They still showed up, and they showed up for Hillary Clinton, a harbinger of this Tuesday. The black vote will be big across the south, and Clinton will continue the process which began in Nevada — pulling away to become the Democratic nominee.

I’ll have a more thorough Super Tuesday preview in the next two days. See you then.