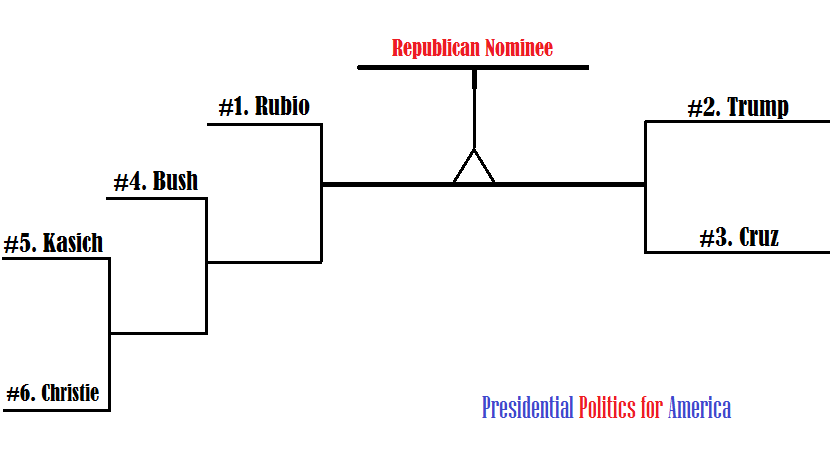 Marco Rubio’s weak debate performance aside, he’s still the favorite for the Republican nomination. Unless I see some polls that reveal the debate was a disaster that sinks his tremendous favorability, second-choice, and general election numbers, he’s still the best blend of conservative and electable in the field, and he will steadily sponge up the support of others who drop out.

And drop out they will. Still, I grant that Rubio’s shaky debate has now given hope to the other contenders who may now remain in the race beyond New Hampshire. They’re counting on us to start perceiving Rubio differently; whereas before he was a confident, refined debater and speaker, now that strength might be his weakness as he’s seen as rehearsed and robotic. That being said, if we look at how strong these candidates look long-term, Rubio is still in the best position. In order to show how I think things will develop, here’s how I envision the bracket for the remaining 2016 Republican Primary:

Let’s focus on the left side of the bracket for now, which is obviously the establishment “region.” Rubio and Bush are in the best position to make a long run at the nomination. Rubio’s strengths I mentioned above and many times in the past. Bush’s growing strength — not just in New Hampshire but as a debater and campaigner as well — make him a threat again, however minor. He and his Super-PAC still have the most cash, and not only has he always polled better than Christie and Kasich in nationally, but he looks much stronger in the third state of South Carolina:

No matter Bush’s finish in Tuesday’s New Hampshire Primary, his strength in South Carolina coupled with Rubio’s sudden vulnerability surely means Bush stays in the race just to see what happens. He’s much better financed than Kasich and Christie to push into Super Tuesday and beyond.

In order to have a one-on-one showdown with his Florida comrade, however, he’ll first need to dispatch with the Kasich-Christie survivor. My seeding gives Kasich the edge. Christie was the field’s MVP on Saturday, but he had fallen so much in New Hampshire’s polls that he probably won’t benefit. Christie has all but been knocked out of a top three New Hampshire running, as seen with the Huffington Post’s trendlines since January 1:

In addition to those trendlines above, the individual poll numbers from Real Clear Politics shows us how much healthier Kasich’s New Hampshire numbers look compared to those of both Bush and Christie:

Kasich looks to have a real shot at a top three showing in New Hampshire, while Christie’s are awful. Looking further down the calendar, Kasich will also have an eye on the winner-take-all Ohio Primary on March 15. If this field is still relatively clumped together by then, Governor Kasich will probably win his home state and take home all 63 pledged delegates, a delegate burst that would look awfully good in the Republican Primary standings. He might be hoping a solid top three in New Hampshire gives the oxygen necessary to last through Super Tuesday, and then see if he can build momentum with Ohio two weeks later.

So Kasich will eliminate Christie this Tuesday, barring a huge Christie pop from that debate performance, and survive to face Bush.  But Bush’s strength in South Carolina will wrest back momentum from Kasich. Kasich won’t play at all in Nevada, which means Bush will keep his momentum over Kasich heading into Super Tuesday, which is dominated by southern states, another definite “road game” for Kasich. A terrible March 1 might force Kasich to drop out, while Bush should survive him and advance to face Rubio for the establishment championship.

But once the field narrows and the electorate broadens, we can’t forget Rubio’s much stronger metrics. Take favorability:

The two candidates are on opposite sides of the favorability spectrum. Winning a closely contested primary is about winning supporters of candidates who drop out of the race. It doesn’t look like Bush, despite his money and other advantages over Kasich, will be able to do that at the rate Rubio will. Thus, Bush is out next, and Rubio wins the establishment side of our bracket.

Meanwhile, Trump and Cruz will have to sort out who represents the antiestablishment “region.” I’ve noted in the past how they don’t pull from the same type of antiestablishment voter, which is a reason why I have them each seeded behind Rubio. One of them will almost certainly be the last man standing with Rubio, but I don’t think the Trump and Cruz people will ever ally into one antiestablishmentarian behemoth. Trump’s non-ideological birther base is unlikely to embrace the Canadian Cruz, and will either turn to a moderate candidate or stay home. Meanwhile, Cruz’s evangelical and libertarian base is unlikely to support the historically liberal and pro-eminent domain Trump, so they’ll find their way to a very conservative candidate like Rubio or even George W. Bush’s brother.

Why Trump over Cruz? Because Cruz didn’t listen to me, that’s why. Cruz should have gone from Iowa to South Carolina to get the leg up on Trump and Rubio there. But now he’s just fighting to get into the top three in New Hampshire, while Kasich and Rubio are on a mission to keep him out. Trump is on his way to winning New Hampshire, and since he’s already up in South Carolina, he’s probably converting a Granite State victory into one down south. That would set up the southern-dominated Super Tuesday nicely for the billionaire, and Cruz’s best chance to knock out Trump early falls by the wayside. Cruz should have been eating into those South Carolina numbers already while on a 44-county tour about which he could have bragged in the days leading up the Palmetto State’s primary.

In sum, Christie is the next to drop out, followed by Kasich then Bush. Rubio emerges to defeat the winner of the Trump-Cruz duel, which will be Trump. That bracket really helped organize those thoughts! That being said, it’s called “March Madness” for a reason. (There’s a rumor that the etymology stems from a basketball tournament, but we now better.) Anything can happen!

See you tomorrow for my New Hampshire Primary preview! Can I continue my crazy good luck after nailing the Iowa caucuses? We’ll see!

2 thoughts on “The Republican Primary Bracket”