We’ve arrived at the sixth Republican debate, the second one hosted by Fox News Business. This debate is also the next to last on the Republican calendar before voting begins. (The next is January 28 in Des Moines, just four days before the Iowa caucuses.) The seven men in my above Microsoft Paint project, which can only be described as Raphaelesque, made the cut.

As usual, the Republican field has been split into a main event and an undercard. (Don’t you kind of wish the Democrats also did this, just so we can see Martin O’Malley interviewed by three moderators at 5:00 in the afternoon?) To be eligible for the main field, a candidate needed to average in the top six of either national, Iowa, or New Hampshire in recent polling. Short of that, earning one percent in a national poll could get a candidate into the early debate. By that criteria, the following candidates were invited to the matinee (Real Clear Politics national polling averages in parentheses):

Because qualifying for the main debate had never been more stringent, the two-tiered debate system has never been more controversial. For example, Fiorina and Paul are polling better nationally than John Kasich, who only made the main debate due to his New Hampshire polling. Fiorina is a tremendous debater and slaughtered the field at her only matinee appearance, so we’ll see her grin and bear it. Rand Paul, however, is refusing to show up and is reportedly ready to go to “war” over the Republican National Committee’s “arbitrary, capricious polling standard,” an irony considering his foreign policy wants to avoid war at all costs.

He has a point. Consider that not only is he polling better than Kasich nationally, he’s polling seventh overall. In Iowa, he was also polling seventh at Monday’s polling deadline and was just 0.2 back of Christie for sixth, the difference of one polling point in one poll. (Paul has since edged Christie in Iowa polling average.) In New Hampshire? Seventh again. So Fox News said a candidate had to rank in the top six in either national, Iowa, OR New Hampshire polling… but Paul ranked seventh in all three. Moreover, seven candidates made the main debate, and he, who ranks in the top seven in each of these key areas, is not one of them. “Arbitrary and capricious” indeed.

Is it a good move to skip the early debate to which he has been relegated? It’s worth a shot. It might be a catalyst for a campaign that has been pretty far out of contention. Being in the top seven everywhere is all well and good, but being in seventh place everywhere also means he’s not a threat to make a run anywhere. For the last four months I’ve had him fluctuating between eighth and twelfth in my Power Rankings, always outside of the contending groups. He wasn’t going anywhere anyway, so why not make this an issue and see if it can get him more free media than an hour of cable in an undercard debate? Perhaps this strategy has worked already; today, the incomparable Presidential Politics for America spent half its “debate preview” talking about him.

Ultimately, even with Fiorina and Paul getting bumped, Fox News Business probably has the right candidates. Consider that in each of my last three months of Power Rankings, these were my top seven candidates in some order. The writing has been on the wall for some time. Limiting the field will allow each candidate more time to get across his views, rather than having ten people limited to a handful of responses. Here’s a quick primer on each of these seven contenders heading into tonight’s debate:

John Kasich (1.8 RCP average) — In all but one state, he’s an afterthought. But in that state? Look out! Here’s the latest Granite State polling trend lines for the six candidates chasing Trump in the New Hampshire Primary (Rubio, Kasich, Cruz, Christie, Bush, Carson): 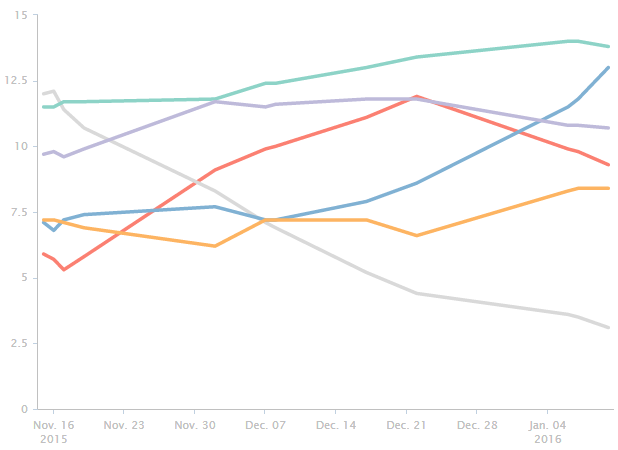 Look at John Kasich! In the three most recent polls, he placed second or tied for second behind Trump. He’s essentially Jon Huntsman 2.0, but will he earn a better fate than finishing in third place in New Hampshire followed by dropping out? Unless he can convince the party he’s not a RINO in these next two debates, I doubt it.

Jeb Bush (4.7) — An outside podium??  Ouch! At last check, he was starting to gain some life in New Hampshire, where a top two finish would set him up for a well-funded run deeper into the primaries, but the trend lines reveal that Kasich is getting most of the recent action, while Rubio continues to look strong. With only two debates left, Bush will get the same advice he’s gotten for the last four debates: Do something to get people talking about you the next day! And he’ll again be incapable of following it.

Chris Christie (3.0) — Has the Christie surge already petered? Like Bush, he’s suffering from the Kasich climb. All three are battling for the same voters. Rubio — with his impressive favorable numbers, foreign policy experience, and extremely conservative record — seems to have a clearer lane than these center-right, problem-solving executives who are splitting 30 to 35 percent of New Hampshire voters who like that kind of thing.

Ben Carson (8.0) — He swears a campaign reset looms, but he’s been saying that for a while. It’s not happening. He’s fourth in the polls but, according to PPFA, seventh most likely to win the nomination. (Which is to say, he’s not winning the nomination.) Will he get more aggressive and “less polite” tonight? I’ll believe it when I see it. If he just goes after the records of politicians rather than the leader of the polls, I won’t be impressed. That’s just low-hanging fruit.

Marco Rubio (11.3) — If any of you are still surprised he’s my #1, watch him closely tonight. Isn’t he the guy the party will coalesce around? Can’t you see it? With a third place Iowa finish setting up a top two in New Hampshire and other establishment candidates dropping out, he’ll be fine. Trump or Cruz have to be dominant early and often. Rubio just needs the slightest of tipping points to get the party behind him.

Ted Cruz (19.0) — For the first time in this campaign, it appears the master strategist is playing defense. Weak on national security votes? Big deal. Potentially leaked information at the last debate? Who cares? But Trump questions Cruz’s natural born citizenship? Relentless hoopla! It’s clear by now that Trump’s a genius madman. In this case, Cruz passes him in Iowa, so Trump blunts his momentum by getting everyone distracted by this latest birthermania. Cruz looked like a lock to win Iowa a week ago, but now it’s moving back toward a toss-up. Still, Cruz still has the imperative ground game edge. Cruz will get the citizenship question tonight, which he’ll answer well, but he still lost a week of progress. The question is, will he strike back at all? On Tuesday he made his most direct anti-Trump comments of this campaign. I’m eager to see if that will continue.

Donald Trump (35.0) — Trump has cloaked this Machiavellian approach under the guise of friendly warning. “I speak well of Ted,” he said. “I’m only saying that Ted has to get this problem solved because if he’s running against a Democrat, and they bring a lawsuit, he’s got a hell of a thing over his head.” Hey, look at Mr. Innocent, just looking out for a fellow Republican because those awful Democrats might bring this issue up to block him from the presidency. In the meantime, Mr. Innocent brings it up to block him from the presidency. Hilariously, when he first started this latest attack plan, he told the Washington Post, “I’d hate to see something like that get in his way. But a lot of people are talking about it.” Actually, Mr. Trump, you brought it up because you wanted something like that to get in his way. Moreover, very few people were talking it! Of course, now people are, the latest example of Trump creating a self-fulfilling prophecy.

He’ll take a similar, “Don’t shoot the messenger” path tonight. He knows Cruz is his greatest threat in Iowa and that Republican voters in Iowa and across the country like Cruz a lot. Trump needs to further erode Cruz’s support while also not losing all of Cruz’s supporters when it comes time to do battle with the establishment. More interesting will be his demeanor. Lately, many members of the Republican Party have had to talk themselves into his potential nomination. Can he show himself to be presidential to continue this process? Tune in!