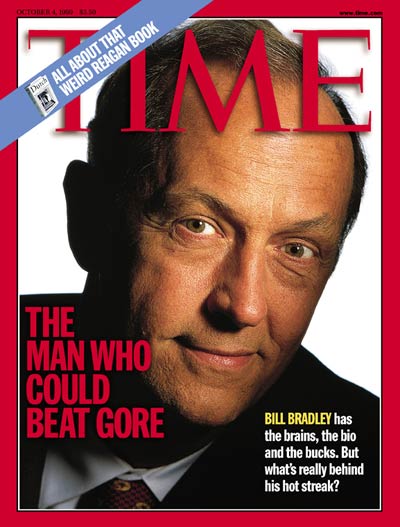 If it’s your first visit of the week, you’ll want to catch up with Part 1 and Part 2 of my quest to identify what candidate best matches Bernie Sanders. Today, I arrive at the answer.

It’s this comparison with a former candidate that makes the most sense. In fact, the next best comparison might be John McCain of the same year. To find the last race that had a favorite like Hillary Clinton — that is, a contested primary where one of the candidates is regularly around or north of 50 percent support — we have to go all the way back to 2000. In that election cycle, Democrat Al Gore polled Hillaryesque 50s and 60s throughout 1999. The result of that primary? He swept all 50 states. Also polling around there was Republican George W. Bush, who ended up taking “only” 43 states on his way to becoming the 43rd president. Similar to today’s Democratic Primary, both of those big front-runners had a challenger — Gore with Bradley and Bush with McCain — who got a minority of voters excited and gave the media hope that it would not be a runaway. But then it was.

Gore and Bush’s numbers then are Clinton’s numbers now.

Really, we should be used to this. Heavy favorites seen as inevitable have usually faced a loud, dissenting minority. Since 1972, there have been four “inevitable” candidates that measured around 50 percent or more support in contested primaries. In each of those instances, the success of their challengers when making pushes in Iowa and/or New Hampshire resulted in many voters thinking the race was a lot closer than it actually was, an appetite fed by the media. All these plucky challengers poured most of their time and treasure into one or both of the opening states in order to hopefully get the subsequent “bumps” from victories, and those states’ polls reflected those pushes. Meanwhile, the media seized on those polls and the ratings opportunity to reinforce the narrative. Finally, for all four of these favorites, once that new storyline developed, cracks seemed to emerge in the frontrunner’s status and people began questioning their inevitability.

We’re seeing that same story play out before our eyes again, so we must ask the question — how did those four favorites end up doing? Take a look:

To the challengers’ credit, of the four examples only Gore was able to more than break even in the first two states, and he still almost lost New Hampshire. Yet, despite the early successes from the challengers, never has that strategy worked out to ultimate victory. The big candidate with the national polling and support from the party ultimately triumphed convincingly after the primaries went national.

With Bill Bradley, we had a progressive long shot coming at the establishment candidate from the left. (Bradley ran on universal health care and campaign finance reform.) We had a well-funded challenger that had the media hoping it would become a race (see the headline image of this post). Moreover, he hoped a win in the New Hampshire Primary would springboard him to a viable national campaign. Most remarkable, we had a fawning liberal wing coalescing into big crowds that number in the thousands. Sound familiar?

Our closest comparison screams at us that she’s not as vulnerable as many on the left would have us think. All of this has happened before, and all of it will happen again.

Finally, I should not totally rule out the possibility that:

Maybe he is. Maybe he will end up winning. But we have to be realistic with our expectations. Anyone giving him more than a one in ten shot is surely being too subjective. One in 20 sounds more like it, and it’d require more of a Clinton implosion than a second Sanders surge. Much more likely than a Sanders nomination is a Clinton sweep of all 50 states. I’d peg her over/under at 48.5 states. Sanders should win Vermont and he has a 50/50 shot at New Hampshire.

I don’t deny the base is excited by him. That’s not the issue, and I’ve never contender otherwise. Good on liberals for finding their progressive champion. As the very first paragraph of this series laid out, this three-parter was not intended to change their minds. This series was targeted at the Sanders fans who think I’m missing something about this candidacy. I don’t think I am. I think you are.

Incidentally, their passion for Sanders mirrors the acolytes of Ron Paul of cycles past. They are usually informed voters with a decent handle on their candidate’s issues, and they think it’s crazy more voters of their own party don’t see what they see. They award their candidate near messianic status. Paul’s rabid fan base thought they’d shock the world, too. They overvalued the metrics that pointed to his eventual success and devalued the traditional signs that it was all but a lost cause.

And Paul ran at a time when the Republican Party was largely unexcited by their eventual nominees, McCain in 2008 and Romney in 2012. But not only are the majority of Democrats supporting Clinton, they actually like her a lot. Last week Gallup found that she enjoys a significantly better favorability rating among Democrats and Democratic-leaners than Sanders does:

So here we are, about 2,500 words into the three-part series, and it’s all rather convincing if you ask me. I do wonder, though, if the Sanders supporters who are convinced the polls are missing his competitiveness made it this far and has been convinced otherwise in the process. If you have made it this far, then let me thank you with the best news I can muster about your candidate.

It is astounding that a self-avowed democratic socialist is competitive and even leading in general election polling against the Republican leaders. What follows aren’t even my words, but the words of PPFA reader Michael B. from New Jersey, who emailed yesterday. He’s convinced of Clinton’s near inevitability, but he still enjoys the Sanders movement and ponders its consequences:

“The fact that a self-professed Socialist can, according to polls at this moment, beat any candidate the Republicans, the Grand Old Party, the people who won the Civil War, can put up, is amazing and interesting. It surely indicates something big is happening. . . . For years after the convention in 2016, when Sanders becomes a footnote, the phenomenon he represents, the possible re-liberalization of American politics, may be of central importance.”

I’ve got some smart readers!

Series over! What’s next?