CNN gave us our first post-debate poll yesterday! Let’s examine them via checking my Friday predictions.

At the far left of this chart are the main results of the poll: 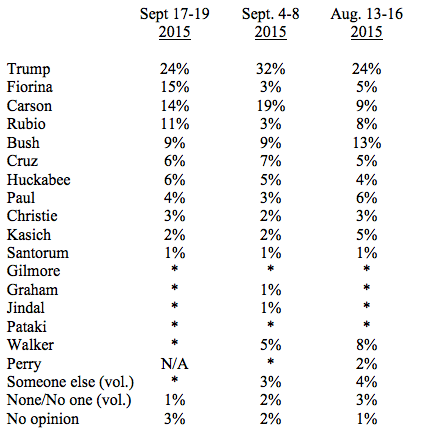 So how’d I do? Let’s take a look. (Warning: I’m about to be pretty “braggadocious.”)

Prediction #0: “We could well have to wait until Sunday” for the first poll. Verdict: Boom. 1 for 1!

Prediction #1: “The top three candidates in the race [will] be non-politicians. With Fiorina’s excellent debate performance, she’ll surely pop. Meanwhile, even if Trump and Carson weren’t great on Wednesday, there is little chance they can collapse so much and in so little time that they are are supplanted by anyone else. I would not be surprised if they are the top three in some order in the next national poll. ” Verdict: Nailed it. 2 for 2

Prediction #2: “Bush will hold steady in the high single-digits, which probably slots him in fourth place, give or take a spot.”. Verdict: Bush finished in fifth, two points behind fourth. 3 for 3!

Prediction #3a: (Still on Rubio) “As important as poll rankings are the metrics buried deep within the poll. He will excel at ‘second choice,’ ‘favorability,’ and ‘How did the debate change your impression of the candidate?’ Verdict: 5 for 5–he scored second in “Second choice” with 13%, second in favorability with a 57/16 split, and although CNN didn’t ask the last question, he did score second in “best debate” behind Fiorina.

Prediction #4: Re: Ted Cruz–“No debate bounce, but he’ll just have another tick up over the course of the coming weeks.” Verdict: Right so far. 6 for 6

Prediction #5: Re: Chris Christie–“After a fun and feisty performance last night, he’ll climb out of the main pack’s basement.” Verdict: Correct again; he’s up to 9th place ahead of Kasich and Walker. 7 for 7

Prediction #6: “Scott Walker, astonishingly, has become a total non-factor. . . . He’ll still be in the top seven but with just a handful of polling points.” Verdict: Right about the first part, totally wrong about the second. Walker has dropped to less than a percent support! 7 for 8

Prediction #7: “Donald Trump should drop a few points.” Verdict: I’d say eight is MORE than a few. Whoops. 7 for 9

Not bad. I’ve had better.

4 thoughts on “PPFA’s Near Perfect Prognostication”